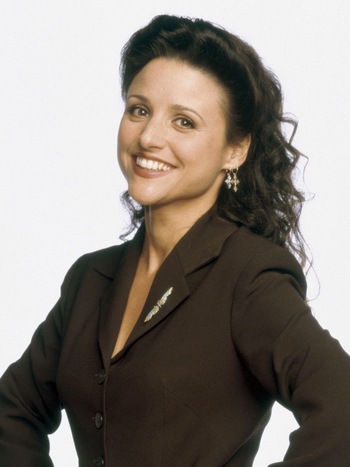 Julia Scarlett Elizabeth Louis-Dreyfus (born January 13, 1961 in New York City) is an American actor and comedian, best known for her work on Seinfeld and Veep.

A Second City veteran, she started in the Practical Theatre Company in Chicago before getting cast on Saturday Night Live in 1982. Despite being overshadowed by the likes of Eddie Murphy and Joe Piscopo (and later, Christopher Guest, Billy Crystal, and Martin Short), Louis-Dreyfus managed to make the most of her time on the show. Her notable recurring characters include Patty-Lynn Hunnsucker (a teenage commentator for "Saturday Night News"note Weekend Update), Weather Woman (a parody of Storm in the recurring sketch, "The Interesting Four"), April May June (a female televangelist), and Consuela (a Hispanic TV show host), and her celebrity impressions include Jo Anne Worley, Andie MacDowell, Linda Ellerbee (back before she did Nick News), Linda Ronstadt, and Marie Osmond (in the infamous Christmas sketch where Marie and Donny Osmond make out). Louis-Dreyfus even found love on SNL; her husband is former cast member Brad Hall, who was an anchor for the "Saturday Night News" segment for season eight and parts of season nine.

Her biggest success was as Elaine Benes on Seinfeld. She has also acted in such movies as National Lampoon's Christmas Vacation, Hannah and Her Sisters and Deconstructing Harry. She is a 11-time Emmy Award winner (eight for acting, three for producing) and the only actress who won for three different comedy series: Seinfeld, The New Adventures of Old Christine and Veep. That last one also gave her the current record for the most Emmy wins for playing a single character, with six. Along with the two she got from Seinfeld, she's tied with Cloris Leachman for the most acting Emmys.