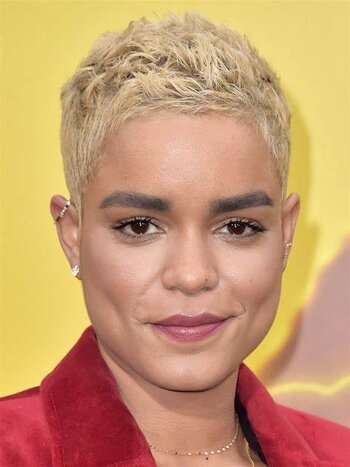 Elizabeth Faith Ludlow (born June 5, 1989 in Pittsburgh, Pennsylvania) is an American actress of mixed African-American/Caucasian ancestry. She grew up in Savannah, Georgia, and was adopted at an early age.
Advertisement:

They have a degree in theatre, while having chosen it over soccer. She became involved with acting while going to Georiga State University, joining a troupe there. Their father had urged Ludlow to stay fit, advice she has followed all her life.

Ludlow is queer and uses she/they pronouns. She's best known for past roles in USA Network series Satisfaction, The Walking Dead and Another Life (2019). They also have had roles in a number of other movies and TV shows.

She is currently dating Carlena Britch, a Canadian actress. Ludlow is outspoken in support of LGBT+ rights. Ludlow states she's drawn to strong female characters and hopes to inspire women or girls with her work by playing them.