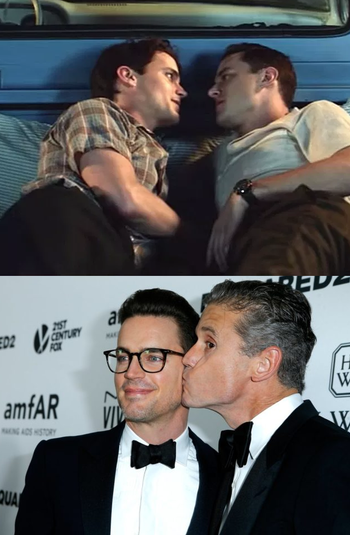 The gay Larry Trainor (top left) is played by gay actor Matt Bomer (bottom left).
"I've had to kind of volunteer to play characters that I can relate to because I didn't have any growing up. So the characters I've been playing and am playing now are characters that could've saved me when I was younger and questioning a lot of things. This representation is so important, this visibility is so important."
— Sara Ramirez
Advertisement:

When the actor cast to play a queer role identifies in the same way as their character, such as a gay man played by a gay male actor, a trans woman by a trans actress, and so on.

With the prominence of LGBT visibility since the 2000s and especially after the 2010s, this trope has become increasingly desirable, especially to make up for the decades-old Double Standard in Hollywood where straight actors would play queer characters and win awards left and right (such as Hilary Swank winning an Oscar for Boys Don't Cry), while actually-queer actors had to either spend their lives in the closet or come out and watch their careers sink. In fact, many once-acclaimed performances are now looked at more critically because the character would constantly talk about being queer without ever acting on it, or their romantic scenes were tepid at best, all because the actor wasn't comfortable shooting love scenes with a same-gender co-star. Casting a queer actor for such a role helps ensure that they won't be squeamish about a Big Damn Kiss and/or sex scene.

The casting directors may not have been actually looking for someone queer to play such roles, but the actors were deemed best for the roles which may be because of the genuine portrayal. Note that though the actor and character may both be queer they may not identify the same way. In this way, the trope may be downplayed or sometimes invoked because of the casting directors wanting an openly queer actor in the role and settling for whatever they can find.

However, it is actually illegal in some jurisdictions (including California and New York State) for casting directors to seek out actors of a certain sexual orientation or to even ask about it. This is due to employment laws meant to protect LGBT actors from blacklisting. When this trope is in effect, it's usually because queer actors seek out these roles and can apply their personal experience to the part.

Of course, this also works in the reverse: queer actors playing straight/cisgender characters, though this is rarer than its inverse, which leads to some questioning of Hollywood standards (queer people can only play queer, but straight people can play anyone).

Transgender actors run into a unique set of problems: when a role calls for a trans character, casting directors often cast cisgender actors and paint them up like drag queens, implying that trans people are just crossdressing. Cis women playing trans women and cis men playing trans men tend to be better received but may still be criticized for taking the role from the pool of trans actors. In fact, transgender actors are very rarely cast for non-trans roles, and if they're able to pass as their target gender, they might even be turned down for trans roles for not looking stereotypically "trans enough."

Interesting instances arise when an actor comes out once already an established character within a universe, and then their character's storyline follows suit.

Subtrope of Actor-Shared Background, and Sister Trope of Disabled Character, Disabled Actor. Not to be confused with Cast Full of Gay, although there can be overlap if the actors playing said cast members are also LGBT+.