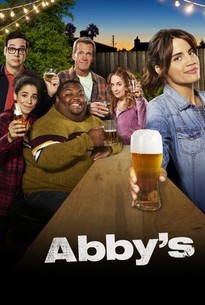 Abby's is an American Work Com airing on NBC, first broadcast on March 28, 2019. The show was created by Josh Malmuth, a former writer on New Girl and Superstore. The cast is led by Natalie Morales, Nelson Franklin, and Neil Flynn.

Abby (Morales), an Afghanistan War combat veteran, has returned home to San Diego and, not happy with the work opportunities she saw available, has opened an unlicensed outdoor bar in the back yard of her house. This happy routine is upset when her landlordnote Female, but they don't use the word "landlady". dies, and the landlord's nephew inherits the property. He dislikes the idea of being responsible for a possibly hazardous drinking establishment and his first instinct is to shut everything down. Abby's pride almost prevents her from coming to an understanding with him. Her loyal customers, though, help to work things out between them.

Abby's is shot in an unusual format. It's a Three Cameras sitcom, common to "traditional" sitcoms with studio audiences. A live audience is present at the shootings, but filming actually does take place outdoors. The audience can be seen briefly in establishing shots.