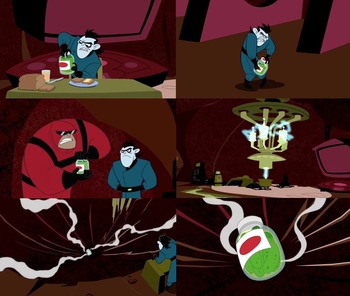 Okay, now it's just being spiteful.
Sheldon: When I fail to open this jar and you succeed, it will establish you as the alpha male. You see, when a female witnesses an exhibition of physical domination, she produces the hormone oxytocin. If the two of you then engage in intercourse, this will create the biochemical reaction in the brain which lay people naively interpret as "falling in love."
Leonard: Would it work if I just punched you in the face?
Sheldon: Yes, actually it would, but let’s see how the lid goes.
— The Big Bang Theory

The Impossible Pickle Jar is a true test of endurance. The goal: open it. Not all can pass the test.

The jar doesn't just have to be a jar of pickles, either. All jars or bottles with stubborn caps, full of jam and peanut butter or still-moving eyes, still apply.

This trope is often used to demonstrate a character's strength, usually a male character. Though it's just as likely to be subverted: the more a character insists on opening the jar to show off, the more likely they are to fail. That, dear readers, is comedy.

After one character struggles like crazy to open the jar, after which another does so easily, the first character might try to save face by saying, "I loosened it for you."

Sometimes, to add to the humor value, the person who succeeds at opening the jar isn't particularly strong; where the strongman of the group strained and failed to pop the cap, the smarter one might just simply resort to getting a proper grip on the lid and some mechanical advantage to torque it loose (a spoon wedged under the lid, for example).

Dr. Drakken vs the Pickle Jar

Dr. Drakken vs the Pickle Jar