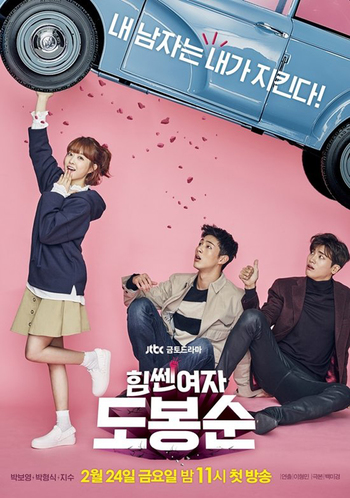 Strong Woman Do Bong-soon (힘쎈여자 도봉순/Himssenyeoja Do Bong-sun) is a 2017 Korean Drama starring Park Bo-young in the title role as a woman with superhuman strength, with Park Hyung-sik and Ji Soo.

Bong-Soon was born with superhuman strength. Her strength is hereditary and passed along only to the women in her family. Her dream is to create a video game with herself as the main character. Through a series of events (her helping out a bus driver who is being attacked by a thug, and easily defeating a mob of thugs who attack her in retaliation), she gets the job of a bodyguard to rich heir and CEO of video gaming company Ainsoft, Ahn Min-hyuk (who just so happens to witness Bong-Soon beating up the group of thugs). He has recently received anonymous threats and even followed by an unknown person, and believes Bong-Soon would make a great bodyguard with her amazing strength.Besides offering high pay, he even offers her the chance of working in the planning department of his gaming company if she does well - a great incentive for her.

Meanwhile, crimes against women take place in Dobong-dong, the neighborhood where Bong-Soon lives. After her friend was targeted, she is determined to catch the culprit. With the help and training from Min-hyuk, she manages to control her strength to use it for good causes. Min-hyuk and Bong-soon find themselves and their relationship grew into something more. However, Bong-Soon is also madly in love with In Guk-doo, a police officer who has been her friend ever since they were children. Kook-Doo tries to solve the series of cases as Bong-Soon and Min-Hyuk are pulled in.

A love triangle, emotional confessions and scenes, mobsters and subplot of a deranged kidnapper — everything that a kdrama usually contains. While it may have some clunky moments, the comedy, the performances, soundtrack and romance makes this drama endearing, and entertaining to many.