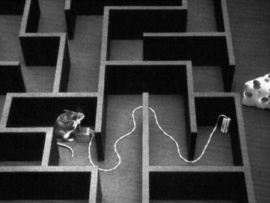 Nothing keeps me from my damn cheese.
"Ask any fighter: A hammer is just a really heavy set of lockpicks."
— The Rant, DM of the Rings #20: "Temple of BOOM"

The Hero has only a limited amount of time to do something, be it rescue, transport, repair, or simply Outrun the Fireball. But he has a problem. A very complicated problem that would need time to solve, time the hero definitely doesn't have. After trying in vain to solve the problem the technical way, the hero Takes a Third Option: getting rid of the problem altogether, with violence. Smash it down, break it apart, run right through it, blow it up. Whatever he does, he "solves" the problem by causing so much damage that it's not his problem anymore.

If the hero ever does this, then he's Cutting the Knot.

When the smart character is trying to find a way around it and the dumb character resorts to violence, the dumb character is often Too Dumb to Fool. When The Leader tramples over objections to prevent Divided We Fall, this often comes into play. Often parodied, such as where the hero tries to destroy the problem, only to succeed in destroying everything but the problem. It can be stopped by Self-Destructing Security. Heroes who make a habit of doing this may boast that We Do the Impossible.

Compare with Debate and Switch (when done with a philosophical rather than physical problem), Dungeon Bypass, Murder Is the Best Solution, "Open!" Says Me, Percussive Maintenance, Sequence Breaking, Steal the Surroundings, Unexpectedly Realistic Gameplay, and Take a Third Option. Contrast We Have the Keys or There Was a Door, where violence is the complex solution. See also Impossible Task, in which this trope is often the only solution. If an authority figure berates you or even punishes you for this trope, see No Fair Cheating.