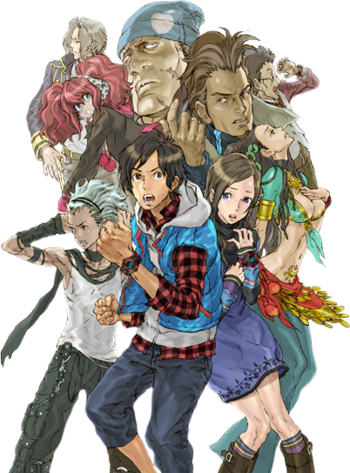 You have been chosen to play the Nonary Game. The characters Clockwise from top left: Snake, Seven, Ace, The Ninth Man, Lotus, June, Junpei, Santa and Clover
"On April 14th, 1912... the famous ocean liner Titanic crashed into an iceberg. After remaining afloat for two hours and forty minutes, it sank beneath the waters of the North Atlantic. I will give you more time. Nine Hours. That is the time you will be given to make your escape."
Advertisement:

Junpei, a normal 21-year-old college student, arrives at home one night to find his window open. Upon closing it, he spots a cloaked figure in a gas mask in the reflection—and the last thing he can remember before passing out is being told that he's just been chosen to participate in the "Nonary Game"...

He then wakes up in a third-class room on an an early 20th-century ship. Upon escaping from there, he finds out that he's trapped on the ship with eight other people who were similarly chosen, and forced to play the game lest the bombs planted inside their bodies go off. Needless to say, things get worse, and they're forced to trust each other and race against the 9-hour time limit to figure out what's happening and why they're on the ship.

The first game in the Zero Escape series, Nine Hours, Nine Persons, Nine Doorsnote in the original Japanese: Kyokugen Dasshutsu Ku Jikan Ku Nin Kyū no Tobira?, lit. "Extreme Escape: 9 Hours, 9 Persons, 9 Doors, or 999 as it is sometimes known, itself plays as one part "escape from the room" games, one part Saw and one part story (though some self-labelled story segments offer the player numerous choice points). Decisions made during story and escape segments determine how events unfold and which characters will interact. There are several branching paths and your decisions impact the ending.

A sequel titled Virtue's Last Reward (in the original Japanese, Kyokugen Dasshutsu ADV Zennin Shibô Desu, or roughly, Extreme Escape Adventure: Good People Die) was announced for the Nintendo 3DS and PlayStation Vita in August 2011. It was released in Japan on February 16, 2012, and released in North America on October 24 2012. It was released in EU territories and Australia the following month.

In February 2014, it was announced that due to low sales in Japan, production for the trilogy's last game was being put on hiatus. Fans responded with a successful Facebook campaign

to show support for the series. In July 2015, the third game in the series, Zero Time Dilemma, was finally announced for the 3DS and Vita, to be released in Summer 2016. In June 2016, a Steam

release of 999 have been teased and, on Halloween in 2016, a remastered bundle with VLR

Despite the use of spoiler tags, this page contains many spoilers by virtue of not being entirely whited out. Somewhat surprisingly, 999 is still possible to play completely unspoiled and most walkthroughs are spoiler-free as well.

SEEK A WAY OUT!

open/close all folders
Tropes # to D
Tropes E to H
Tropes I to Q
Tropes R to Z
"You found it!"