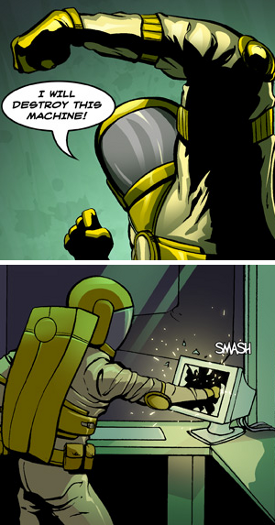 Yes! Now the other side will have to spend a whole $100 to replace it!
"Oh no. Please not the computer monitor... that's the key to the entire device... you've destroyed everything definitely. [to phone] Yes, hello. I need some officers here immediately."
— The Clone of Ben Franklin, The Adventures of Dr. McNinja, "Army of One", page 24

In real life, far more often than not, a computer monitor only serves as a visual display that can be easily replaced if broken. All the actual important stuff — the motherboard, processor, storage, etc. — is housed in a separate computer tower.

Not so in the world of fiction! In fiction, to destroy the computer, and any data stored on it, you only need to destroy the monitor. Usually by shooting it or giving it a good punch.

The trope originates with early personal computers. Systems such as the Commodore PET, the TRS-80 models III and 4, and the Apple Macintosh really were a case of the monitor also housing all of the vital computing components as well. However, the "all-in-one" desktop computer is no longer in the majority of computer usage by any stretch of the imagination (popularity of Apple's iMac series aside), and anyone that requires a computer capable of doing heavy processing work (be it film editing and rendering, gaming, or just some serious number crunching) is unlikely to choose them over the now more commonplace monitor and computer tower setup.

Part of the reason this trope is so commonplace is that, psychologically, the monitor is the "face" of the computer. This is where one sees everything going on, so, if one doesn't have specific knowledge of how computers work, it's not unreasonable to think it's where everything does go on. Or else, if the screen is the "face", the casing must be the "head" and contain the "brain". This can be Truth in Television for people unfamiliar with computers. See also Cranial Processing Unit, a similar misconception applied to humanoid robots.

Rarer is destruction to the keyboard destroying the entire unit (usually due to a carelessly spilled drink). Unlike the monitor, this is actually a more realistic concern considering that most popular 8-bit home computers housed their processors and keyboards in the same unit, using a normal television for their monitor, and many laptops today have the keyboards on top of the circuitry. However, you are far more likely to see the monitor take the killing blow despite it being far less catastrophic.

Damaging a monitor can be justified as making the workstation unusable until another monitor can be hooked up at worst, and possibly killing the computer anyways at best.note CRTs have powerful capacitors that can hold a very high voltage charge for a couple of minutes even after the power is unplugged. A well placed shot with a metal bullet can, possibly, cause the CRT to discharge the voltage into the data lines, killing the computer or at least the video adapter as well in the process. Even unplugging a monitor with the computer still on can on rare occasion be enough to cause severe damage if it's not designed to be hot-pluggable.

Besides, CRTs blow up so spectacularly, which is why computer science students are taught to only let professionals work on them, as opposed to how other computer components (generally those connected directly to the motherboard) can be worked on more easily. One wonders how long this trope will continue as they become obsolete.

Of course we are also there already in some ways — a smartphone or tablet is essentially a monitor with the computer built in. Just not in many examples from pre-2005. The rise of all-in-one PCs have this well on the way to being an Undead Horse Trope, since the main appeal of these machines is all the important machinery being in the same box as the flatscreen.

Boris, toward the end as the antenna had been physically jammed by Bond and is being prevented from sending new restaging instructions to prevent the remaining GoldenEye satellite from burning up in the atmosphere - he's seen shaking the monitor while yelling "Speak to me!" On one hand, a hacker like him should know better. On the other hand, he is very much frazzled and desperate at this point and as much of a computer expert as he is Boris is definitely not professional in his mannerisms.

Boris, toward the end as the antenna had been physically jammed by Bond and is being prevented from sending new restaging instructions to prevent the remaining GoldenEye satellite from burning up in the atmosphere - he's seen shaking the monitor while yelling "Speak to me!" On one hand, a hacker like him should know better. On the other hand, he is very much frazzled and desperate at this point and as much of a computer expert as he is Boris is definitely not professional in his mannerisms.