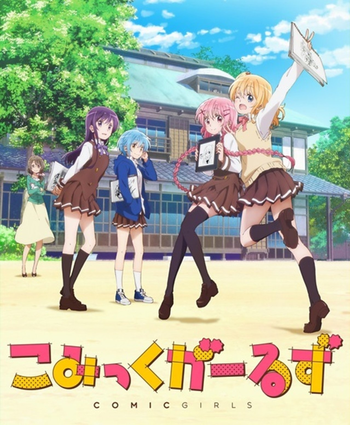 Comic Girls (こみっくがーるず, Komikku Gāruzu) is a 4koma manga by Kaori Hanzawa that began running in May 2014. It follows Kaoruko Moeta, a manga artist who creates 4-koma manga. When her work is met with overwhelmingly negative reception, her editor arranges for her to live in a dormitory with other aspiring manga artists. Kaoruko meets a variety of individuals on her arrival, including Shoujo manga artist Koyume Koizuka, shounen manga artist Tsubasa Katsuki, and Ruki Irokawa, who specialises in Teens Love, a more mature Shoujo subgenre. Together, the girls strive to improve their craft, all the while helping one another overcome the trials and tribulations associated with working in the manga industry. Along the way, Kaoruko befriends her roommates and meets the other tenements in their dormitory.

Serialised in Manga Time Kirara Max, Comic Girls received an anime adaptation that aired during Spring 2018. The anime adaptation, produced by Nexus, is directed by Yoshinobu Tokumoto, with characters designed by Keiko Saito and music by Kenichiro Suehiro.

Compare with Hidamari Sketch, also a Moe Slice of Life about artists. Also compare Bakuman。, a more Shōnen example of a manga about manga artists.