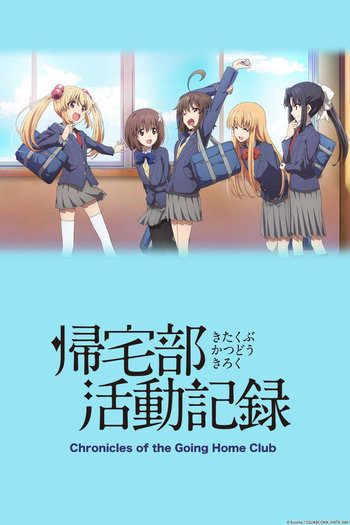 "If you do nothing, your youth will pass by in an instant. That is why we formed the Going Home Club."
— Sakura Domyoji
Advertisement:

Chronicles of the Going Home Club (Kitakubu Katsudou Kiroku) is a comedy manga series written and illustrated by Kuroha, which was serialized in Square Enix's Gangan Online magazine from 2011 to 2014. An anime adaptation by Nomad consisting of twelve episodes aired in July 2013.

It's common for Japanese students with no intention of joining an after-school club to be referred to as having joined the "Going Home Club;" So when freshman Natsuki Andou declares her intention to join the eponymous club, she's surprised to find that her new pal Karin Tono has been led to believe in a literal Going Home Club. As Natsuki comes to find out, the club has a presence in the school, and is staffed by three of its most bizarre upperclassmen:

There's Ordinary High-School Student Sakura Domyoji, whose inheritance is her grandmother's scissors, Botan Ohagi, whose family are heirs to the highly-guarded Hagizuki-ryuu martial arts style and who once wrestled a Brown Bear (And a Grizzly Bear, and Polar Bear), and Claire Kokonoe, who's the daughter of a company executive and almost bought Karin a stationary store when the school store had run out of her favorite color of eraser.

Espousing their belief that life will pass before their eyes unless they're having fun, the Going Home Club is dedicated to having as much fun as possible before going home.

Those living in the United States, Canada, the United Kingdom, Ireland, South Africa, Australia, and New Zealand may watch the anime legally at Crunchyroll.

Chronicles of the Going Home Club provides examples of: