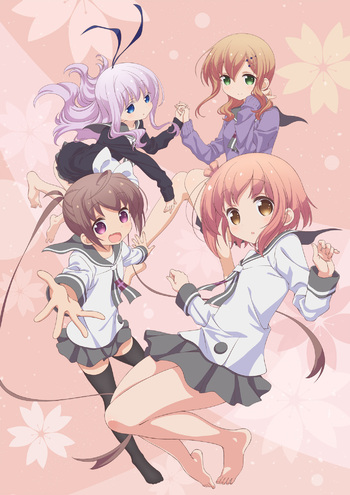 Aren't you glad we took a detour?
Advertisement:

Hana Ichinose was afflicted with mumps on the day of her high school entrance examination, and so, was unable to attend high school. Upon taking the exam a year later and gaining admissions into high school, Hana is concerned that her year-long sabbatical may alienate her from the students in her year, especially since she's now a year older than her peers. In spite of her slow start, Hana is determined to put forth her best effort and catch up to everyone else now that she's in high school.

Slow Start (スロウスタート) is a 4koma manga written by Yuiko Tokumi and has been serialised in Manga Time Kirara since 2013. Its anime adaptation was released as a part of the Winter 2018 anime lineup. The anime is directed by Hiroyuki Hashimoto (who had previously worked on Is the Order a Rabbit?) and is produced by A-1 Pictures. Slow Start may be watched at