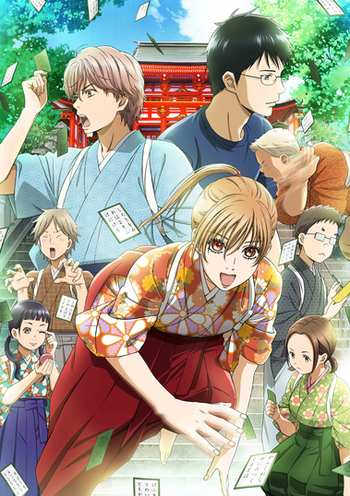 Chihaya Ayase dreamt of seeing her sister become Japan's next top model, until one day, when a new transfer student, Arata Wataya, tells her that she should have a dream for herself to work at. Arata's own dream is to become a top Karuta player; this dream also becomes Chihaya's own after she experiences the game firsthand and becomes entranced by it.

Chihayafuru is a josei sports/traditional games/romance manga that began its run in Be Love in 2007, and was the winner of the Kodansha Manga Award for Best Shoujo and the Manga Taisho Award. It also marked the recovery of the author, Yuki Suetsugu, after the infamous plagiarism scandal

that almost ruined her career.

Two seasons of an anime adaptation aired as part of the Fall 2011 Anime and Winter 2013 Anime seasons, with a third season airing in 2019-2020. Three Japanese live action films starring Suzu Hirose, Shuhei Nomura, and Mackenyu Arata were released in 2016 and 2018.