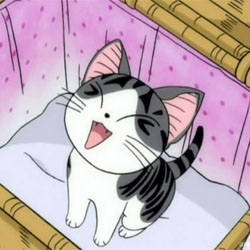 Ain't she just so cute?
Advertisement:

Originally a (seinen!) manga series written by Konami Kanata, Chi's Sweet Home (チーズスイートホーム, Chīzu Suīto Hōmu) is the story of a lost kitten who tries to return home to her mother and littermates, only to be adopted by a couple (the Yamadas) and their young son Youhei. However, the apartment complex in which the family lives doesn't allow pets, so a lot of time is spent preventing the landlady and the other tenants from seeing Chi. Later, the Yamadas move into a new house, and Chi has to adjust once again to her new surroundings.

The anime is produced by Madhouse, and each episode is three minutes long. The episodes correspond to one chapter from the manga. Chi is voiced by Satomi Koorogi, better known as Menchi of Excel Saga and Umagon/Ponygon from Zatch Bell!.

The manga is currently licensed by Vertical, with its first volume released July 2010. Both seasons of the anime were licensed by Discotek Media in April 2014.

The manga finally wrapped up in 2015 after its 11 year run. However, the anime has now gotten a reboot serving as a sequel to the Madhouse anime, airing in 2016. The reboot's episodes are about ten minutes long as opposed to three. The first season aired 51 episodes and it has now begun its second season.