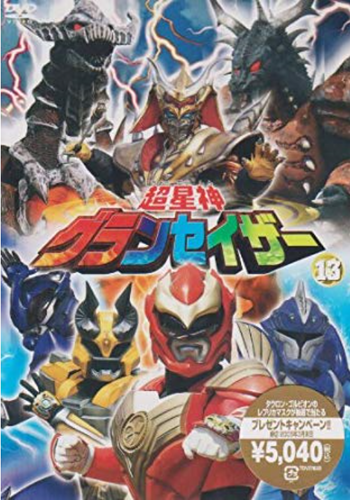 Millions of years ago, the Earth was once a highly-advanced civilisation until the day it was attacked by an alliance of alien races called "Warp Monarch". Though humanity built giant humanoid war machines called "Ultra Star Gods" to defend themselves, the civilisation was ultimately defeated by Warp Monarch's superior numbers.

Now in the modern day, the Lost Technology of that precursor race is stirring, awakening the dormant DNA of their descendants in response to a new threat. Courier Tenma Kudou discovers that he is one of the chosen, gaining the power to transform into one of the twelve legendary warriors known as the Gransazer.

Like their ancestors, the Gransazer are split into four elemental Tribes: Fire, Wind, Earth and Water. As the leader of the reborn Fire Tribe, Tenma (as Sazer Tarious) soon finds both allies and enemies in the other three Tribes as he struggles to unite them in the face of the alien menace that threatens to repeat the genocide of the past. Fortunately he has help, for when three members of the same Tribe unite their powers they can summon their respective Ultra Star God and take the fight to the enemy.