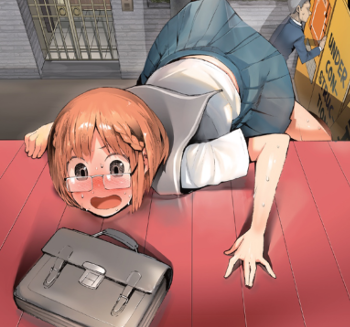 Just another morning for Chio.
Advertisement:

Chio Miyamo is a self-proclaimed "below average" girl who likes playing shoot-em-ups and Western games. For all she says she's "below average", though, she's anything but that, given her overactive imagination and her willingness to pull dangerous and impractical stunts. Her most exciting part of the day just so happens to be her commute to school, and it's not at all hard to see why — from delinquent gangs to parkour, kabaddi to competitions with friends, there's no way that the journey to school could ever be a boring one.

Chio's School Road (Chio-chan no Tsuugakuro) is a manga about the Mundane Made Awesome misadventures of one girl and her ridiculous school route, written and illustrated by Tadataka Kawasaki. The manga was serialized in Comic Flapper from April 2014 to September 2018, and was compiled into nine volumes. An anime adaptation had been announced for 2018, but was delayed until July. Funimation's Simuldub of the anime series premiered on July 25th, 2018. Watch it here.

Yen Press started releasing an official English translation of the manga in August 2018.