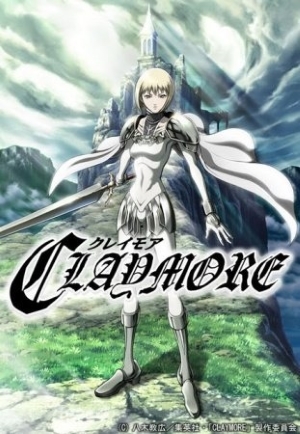 Clare: Elena... She joined the Organization the same time I did. We comforted each other in our darkest hours. When our bodies were transforming and we were wracked with pain, we'd hold each other at night so we could sleep. And... From the time I joined the Organization as a child... She was my only friend.
Raki: Why? But why? If it's so painful, why do you fight the Yoma? If you didn't... If you didn't fight... Elena wouldn't have had to die... And neither would you...
Advertisement:
Clare: For us... That is our Reason for Being.
— Claymore, Volume 01, Scene 004, "The Black Card"

On a continent cut off from the outside world, in a medieval-ish civilization of scattered cities and villages, demons called Yoma hide among the humans and prey on them for food. These demons are capable of tearing through armored soldiers, have an insatiable appetite for human entrails, and can disguise themselves perfectly as humans. For these terrorized communities, there is only one source of salvation: pay an exorbitant sum of money to a mysterious group called The Organization, which will send one of its fearsome silver-eyed female warriors to root out the threat.

Nicknamed "Claymores" by the common people after the great swords they wield, these warriors are half-human, half-demon hybrids possessing superhuman strength, speed, and regeneration, as well as senses that can detect demons and demonic energy. They are all adopted as orphans by the Organization and trained after undergoing the painful surgery to implant demon flesh in their bodies, learning to use their demon halves to bring out their most impressive abilities while fighting Yoma. However, a Claymore who releases too much of her demon power at once runs the risk of losing control and turning into something truly monstrous. Human society rejects them as freaks, and their own Organization treats them as expendable pawns by sending them on one dangerous assignment after another until their luck runs out. Desertion from the Organization is punishable by death, as is breaking one of their iron-clad rules: they must not kill a human under any circumstances. There are 47 active Claymores at any given time, on top of numerous trainees and younglings. Each Claymore is assigned a numerical rank based on overall strength and competence.

Our main character is Clare, a stoic and self-sacrificing warrior assigned the number 47. She is the weakest Claymore of her generation because she took on the flesh of a fellow warrior instead of a Yoma, and is therefore only one-quarter demon. During her travels, she takes in a teenage boy named Raki who was cast out by his village after she killed the demon that ate his family. Raki tags along with her as her cook as she goes from village to village plunging into one desperate fight after another, and eventually gets past her emotional defenses enough to earn a place in her heart. However, Clare is caught up in her own quest to get Revenge on the monster that killed her mother-figure. On top of that, she is soon sucked into a vast conflict between the Organization in the East and the supreme demons called the Creatures of the Abyss that rule the North, South, and West, as well as a rebellion by a group of Claymores who want to expose the Organization's dark secrets. What ensues is a story of sacrifice, survival, True Companions, and finding something Worth Living For.

Claymore (クレイモア Kureimoa) is a Dark Fantasy shonen manga by Norihiro Yagi, who wanted to try drawing a more serious story after finishing his debut manga, the high school delinquent parody Angel Densetsu. Stylistically it takes inspiration from the generation of action manga that Yagi read as a youth including Fist of the North Star and Space Adventure Cobra. He planned the plot loosely so that he could let it develop naturally and the tale grew with the telling, beginning publication in May 2001 and finishing in October 2014 at 155 chapters. Notable draws for the series include its World of Action Girls, drawn-out and gory fight sequences featuring some really hideous demons, and its exploration of what makes someone a human or a monster. Madhouse adapted the manga into a 26-episodes anime directed by Hiroyuki Tanaka and written by Yasuko Kobayashi, which aired in Japan from 3 April 2007 to 25 September 2007. It covered the story from volume 1 to the first half of volume 11 (up to chapter 59), staying relatively faithful to the source material until its departure from the manga in its last episodes, which it took in order to give the series a conclusion the manga didn't have at the time.

open/close all folders
A-D
E-K
L-R
S-Z
It's all right.
We've crossed blades as Claymores.
We can have no regrets.