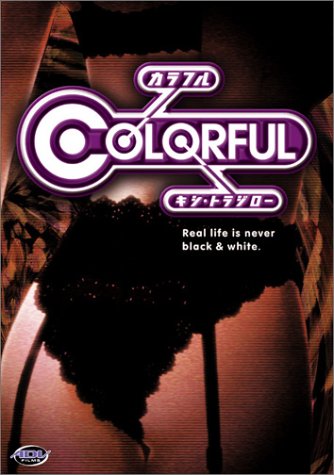 Colorful!
Roses are red.
Violets are blue.
This show's about panties.
Advertisement:

Colorful is a 1997 manga created by Torajirō Kishi of Maka Maka and Otome no Teikoku fame, and was serialized in Weekly Young Jump; and was later adapted into a short anime in 1999 by Triangle Staff and was broadcast on TBS (16 episodes, each about seven minutes long).

It is about males and their obsession with panties (and sometimes breasts). It's quick-paced with little to nothing in the way of actual plot, focusing instead on delivering ecchi humor in whatever way it can.

Not many characters show up more than once, and those that do lack depth. Among the recurring ones are Hirokawa and Itani (two college students), Yamamoto (a cute athletic girl), Yamamoto's coach, the English teacher, Steve (an American transfer student obsessed with photography), and Shimoi (a TV reporter).

As The Other Wiki says, "Anime fanatics tend to either love or hate the series as it is considered either wildly funny, or tasteless and depraved."

Not to be confused with the Japanese animated film also titled Colorful.