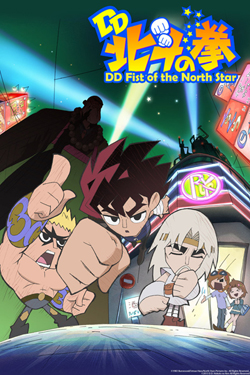 Welcome! Thank you for your patronage! Would you like that warmed?
In 199X, the world had no nuclear wars or natural disasters, and all was truly at peace.
— Opening Narration
Advertisement:

Our formerly muscular hero Kenshiro is now a chibi wandering the streets of a clean, civilised, modern day Japan. He is hungry, has been fired from a previous job and is desperate for money until he gets the idea of pretending to be a cat. He is adopted by Lin, who had also happened to adopt Ken's older brothers, Raoh and Toki (Who pretended to be a dog and a rabbit respectively) who, after a happy reunion, find that their master, Ryuken, is alive and is in need of another part time worker, with Bat already having taken one spot. Since the store's short on money only one of the brothers can get the position. Cue the three brothers getting into various misadventures as they vie for the position whilst failing to understand basic societal norms.

There was a previous series with the same name that started out as a series of Flash-animated shorts aired in 2010. Though it had the same premise as this current series (No nuclear apocalypse, modern day Japan,) it was more slice of life and the character plots were largely different in that Ken and Raoh already had jobs (A computer expert and construction worker respectively) while Toki was sick and had to stay at home, Ryuken owned a fast food joint and Jagi was on the run from the law.

The second series ran in April 2013 and is currently available on streaming sites such as Crunchy Roll. Sentai Filmworks, who previously licensed and released Legends of the Dark King, has licensed the series for a U.S. release. It ended in June 25, 2013.

The second series and a currently ongoing manga proved popular enough for a third series to be produced. Titled DD Fist of the North Star 2, it began running in October 6, 2015. It's also currently ongoing. While the character design and humor are largely the same, the setting is completely different and it ignores the events of the two previous series.

''This series contains examples of: