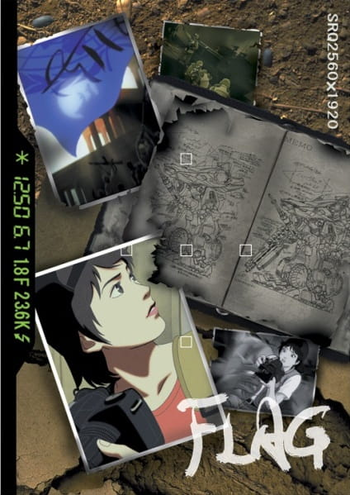 The camera has been watching.
Advertisement:

Flag is a series by Gasaraki director Ryousuke Takahashi about a small central Asian country called Uddiyana and its civil war. Japanese photographer Saeko Shirasu has been sent to take pictures of the conflict and the newly formed "United Nations Forces" war machine's efforts to bring peace to the region. During a battle in the country's capital city, the local militia groups and the UNF drive out the insurgent groups and scale a statue in the city square to raise a modified version of the UN's flag. Saeko, attempting to get a picture of two women praying on a rooftop, catches the flag in the picture as well, and photo circulates around the world, inspiring a message of peace and unity for the warring factions, and even spurs discussions of a possible cease-fire agreement.

However, an insurgent group eventually steals the flag from its safehouse out of spite, and the UN, not wanting to look taken off-guard, forms a task force called the SDC (Special Development Command) to recover the flag and test the battle-readiness of the UNF's latest combat unit, the HAVWC (High-Agility Versatile Weapon Carrier, pronounced "havoc"). Saeko, for her part in taking a picture of the flag, is offered a chance to work with the SDC and document their progress in retrieving the flag, so that their efforts can act as an inspiration to the world and boost the image of the UNF. Over the course of the story, Saeko has several discussions with her fellow reporter and mentor, Keiichi Akagi, who offered her the Uddiyana job in the first place, interviews the various people who make up the SDC, and learns just what sort of effects the HAVWC units have on the soldiers who pilot them.

Flag is a series that greatly modernizes the war story. It portrays a future where the victor of a war is no longer the country with the biggest army or the best weapons, but the country that can best control the minds of its citizens with propaganda like Saeko's flag picture. The HAVWC units are endlessly schematized and their every function is described in detail, but they only see combat on a handful of occasions. The efforts of the UNF to recover a single flag is the least implicitly "realistic" aspect of the shownote Although there are historical

, but emphasizes the show's idea that propaganda and the ability to make people rise to action is what wins a war.

The series is also notable for being told in an incredibly distinct visual and narrative style. Everything the viewer sees is from the point of view of a camera (though not always the same one), and still images also appear at least as frequently as animated sequences. Furthermore, the whole series is narrated by Keiichi Akagi as he plays back video footage from the various cameras seen in the series on his computer, establishing that while everything the audience sees is from the past, the future of Saeko and the SDC remains unclear. Flag is a series for those interested in a more realistic take on warfare, but that still contains the somewhat fantastic ideals of a war effort to recover a piece of cloth and deadly giant robots in the desert.