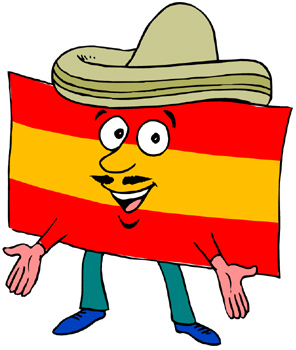 Picture found on an educational website.
"Spain is a peaceful land of giant hats and luchadores (or maybe we're getting that confused)."
— Cracked
Advertisement:

Fiction writers seem to not just confuse Mexico and Spain, but to fuse them into a strange amalgam of the most general stereotypes of both, much as Scotireland fuses Scotland and Ireland. Maybe it's because they share a language and their majority religion, the fact that Mexico used to be a Spanish colony, they both have exotic foods and customs compared to an Anglo-Saxon culture,note And compared to each other, as well. or simply that the author didn't check the facts and hasn't travelled much, either.

American writers (and particularly those in California) also have the excuse that Mexico is literally over the border from the US note (Alta) California was part of Mexico from September 27, 1821 to February 2, 1848. while Spain is an ocean away, so the more familiar Mexican culture to them colors their perception of Spain. This approach, naturally, requires the writer to ignore that Mexican culture owes as much to the native cultures that existed there before the Spanish conquest, like the Maya and the Aztec/Mexica ones, as it does to Spain's (although Hollywood has never showed its strength when having to keep those apart either), that Mexico is more influenced by U.S. culture than Spain is, and that the two countries are, simply put, an ocean apart from each other and have been not under the same flag for almost two centuries now, meaning that they have had ample room to develop independently from each other - be it in law, politics, holidays, food, dress, music or even language. Indeed, not only do they speak different dialects of Spanish in Spain and Mexico (the epic wars between supporters of Castilian and Latin American dubs on YouTube are a testament to that) but there are also different accents and dialects within the countries themselves.

This trope came to be due to the "Good Neighbor Policy"

in the 1930s and 1940s, when America sought friendly non-interventional diplomatic ties with Latin American countries. Prior to this, works that revolve around Spanish language and culture focused directly towards Spain. Following the Spanish Civil War and Francisco Franco's regime, media, especially Hollywood media, sought for easier and more practical alternatives, and with Franklin D. Roosevelt's implementation of the Good Neighbor Policy, they looked no further than Mexico as a shorthand for Spain, and it stuck ever since even after World War II and the death of Franco in 1975.

In its usual form, this trope is represented by a group or town that is full of stereotypically Mexican or Spanish people, set in a location or doing an activity better suited to the other. That is, when they aren't just made into a mish-mash. It could be a Spanish mariachi band at a wedding instead of a tuna

singing Clavelitos, or a town of thick-mustachioed men in sombreros and ponchos dancing Flamenco. When South of the Border and Latin Land are brought into the mix, it could even end with Spain being depicted as a hot, tropical jungle or desert full of revolutionary outlaws, sometimes fighting a Banana Republic run by a Fascist dictator (which might have been technically true during Franco's dictatorship, except there are no tropical jungles in Spain. But it's definitely false in anything set after 1978, and that's being generous). It also takes the form of Spanish characters sporting names or surnames that are Hispanic in origin but geographically uncharacteristic (for example, Salazar or Chávez are very common in the American continent, but actually very rare in Spain).

US productions are likely to misrepresent Spaniards more often than Mexicans, since Mexicans have many more demonstrable stereotypes in American pop-culture than Spaniards do, and they will likely have a much easier time casting Mexican actors (or from anywhere else in Latin America) than Spanish ones, accents and even race

be damned. In Japan, where both nations are equally exotic, the mix and mash is likelier to happen both ways. It cuts the other way in Europe, where British productions in particular see Mexico (and the rest of Latin America outside Brazil) as nothing more than a region of Spain with sombreros and chili where the familiar Castilian (European) version of Spanish is universally spoken.

See Toros y Flamenco and South of the Border for Hollywood Atlas versions of Spain and Mexico, respectively. Contrast Latin Land for a similar fusion of different countries south of the United States in a process not that different of Spexico, with only jungle or llamas added for flavor depending on the circumstances, and narcoterrorists if convenient. Compare Latino Is Brown, when fictional depictions of Latin American characters are portrayed as Mestizos.

Compare Far East, Ancient Grome, Scotireland, and Mayincatec. Spexico is not the only example of transatlantic fusion, however: a similar phenomenon occurs with depictions of Quebec in Hollywood movies as being full of Frenchmen with Parisian accents and mannerisms, and outside the Anglosphere some people can't see the difference between the UK and the US either.

Rex asks the Spanish speaking Dos if he's Mexican. Dos is visibly displeased when he replies that he's from Spain.

Rex asks the Spanish speaking Dos if he's Mexican. Dos is visibly displeased when he replies that he's from Spain.