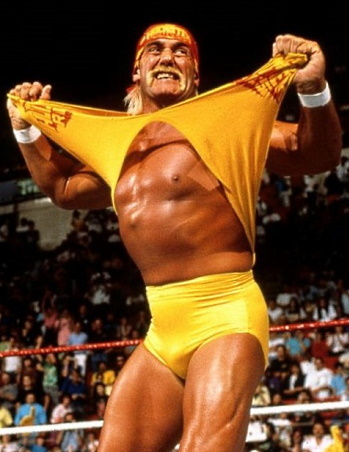 "Whatchya gonna do?"
"It's anime law: whenever a male shōnen protagonist takes off his shirt, all of his attributes increase exponentially."
— Kurama, Yu Yu Hakusho Abridged
Advertisement:

Bob the Strong is going to be in a major fight, like with The Dragon or the Big Bad, or just with a huge amount of Mooks. As he approaches the enemy, he—

Wait, he's taking off his shirt?

Battle Strip is when a character, especially one who is modest, either has a Stripperific battle uniform (for the gals), or doesn't wear a shirt in a fight (for the guys). The main reason is that clothing could restrict movement/attacks, or it's also a sign of badass. It also gives the opponent fewer things to grab and pin the fighter down with. However, sometimes it's just plain Fanservice.

Related to The Coats Are Off (when a character takes off his coat before joining battle), Shed Armor, Gain Speed, The Glasses Come Off (a Badass Bookworm removing his glasses before fighting), Action Dress Rip, and Full-Frontal Assault. Can overlap with Shapeshifting Excludes Clothing if the clothes must be removed before transforming, or are destroyed by it . Not to be confused with Clothing Damage, when the character's clothing gets destroyed during a battle, or Giving Them the Strip, when clothing is torn or discarded to escape being grappled and avoid a battle.

"Time to kill everyone!"

"Time to kill everyone!"