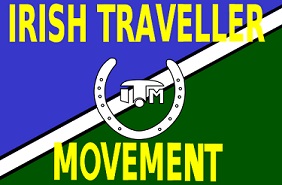 First off, don't call a Traveller a "Gypsy" (ditto for Romani people). It's a derogatory word, and just about the most offensive way you can possibly refer to an Irish Traveller. In its negative sense, it can refer to someone who makes a living by theft or dishonest practices, but not necessarily Romani. Only the word "pikey" might be worse,note Referring to blue-collar, lower-class working people who may be from the wrong side of the tracks, or what Americans would call "trailer trash" with connotations of theft or abusing the welfare system but that only happens in Britain. "Knacker"note Meaning a horse too old or sick for work, or a person who buys such animals for slaughter is another well known derogatory term; some Travellers today are significantly more offended by "knacker" than "gypsy". Another derogatory term which the Travellers are sometimes called is "itinerants". Older works (and older people) might call them "Tinkers", from the fact that a lot of them used to be itinerant tinsmiths. This is also considered offensive, if not so much. The terms by which they refer to themselves are "Pavee" and "Minceir" (Lucht Siúli, "The travelling people" in Irish Gaelic), not that you'll hear it used much. "Pavee" can, however, be considered offensive when used by someone outside of the Travelling community.

Irish Travellers are a people who share the language Shelta, commonly known as Traveller Cant, derived from a mixture of intentionally-incomprehensible Irish backslang and a few English, Romani, and other loanwords, though in the modern era they primarily speak English. They are tribal, like the Romani, and share the perception in media as being "evil outsiders", and some are nomadic, and share a passion for boxing (most notably Tyson Fury, born to Traveller parents who migrated to England), but other than that, they're different from the Romani and don't appreciate being lumped into the same category.

The fact that Irish Travellers are culturally different from most other White Europeans—including other ("Settled") Irish—is where a lot of the media bias comes from. There has historically been, and continues to be, a lot of discrimination against Travellers because of this. Though anti-discrimination laws exist, many establishments still prohibit Travellers from frequenting them. The Gardaí (Irish police force) ranked Travellers as their ‘least favorite’ ethnicity in a survey

note source quotes a survey based on a very small sample of police officers and should be treated cautiously. Politicians, including presidential candidates and ministers, have frequently used Travellers as an easy target, and play on biases of the public at large. Fates may be changing slightly, as 2020 saw the election of the first senator from the Travelling community appointed to the Seanad.

Irish Travellers have only legally been considered a separate ethnicity from the settled Irish community since 2000 (in Britain) and 2017 (in Ireland), though Irish discrimination legislation prior to that had referenced membership of the travelling community in addition to race and religion. This is why references in Irish media are made to 'the Travelling community' and 'the Settled community'. All of this is a political hot potato.

There is a population of about 7,000 Travellers in the United States, concentrated in the Deep South. Some have settled down, but others still maintain the Travelling lifestyle, albeit in RVs rather than the more traditional covered wagons.

You might notice that this article doesn't say anything about the origin of the Irish Travellers. That's because nobody's really sure about it... not even Travellers themselves. Genetic analysis has verified that they're native Irish, but no record exists for the origin of their distinct cultural traditions. How, why, and when they separated from the rest of the Irish people is a subject of speculation, but the lack of evidence means it'll almost certainly never be answered.

The traveling people are a common theme in Irish music. They're often portrayed romantically, making off with a lord's daughter or otherwise getting the better of their fellow men.

Some singers and songwriters have written one or more songs about the life of the tinker, including: