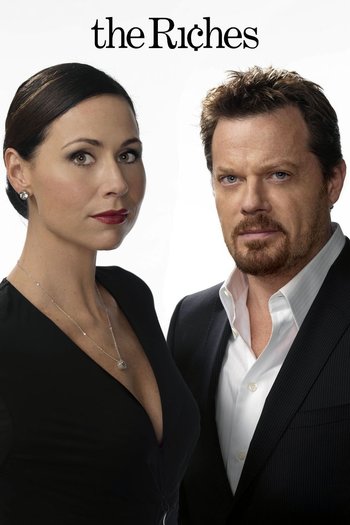 "What's yours is mine."
Advertisement:

The Malloys are a family of Irish Travellers and accomplished con artists. Wayne Malloy (Eddie Izzard), the head of the family, his wife Dahlia (Minnie Driver) - and their kids, Cael (Noel Fisher), Didi (Shannon Woodward), and Sam - gets on the wrong side of a Traveller clan, and the family goes on the run. While fleeing from another Traveller who they bumped into on the road, they accidentally run over a rich couple who are moving to a new neighborhood off the road, killing them. The Malloys take the chance to adopt the couples' identities and house and begin to experience life in the upper class.

This Dramedy (emphasis on Drama, but with Eddie Izzard in the cast, uproarious comedy was more or less inevitable) ran on FX for 2 seasons in 2007-2008.

The Riches provides examples of: