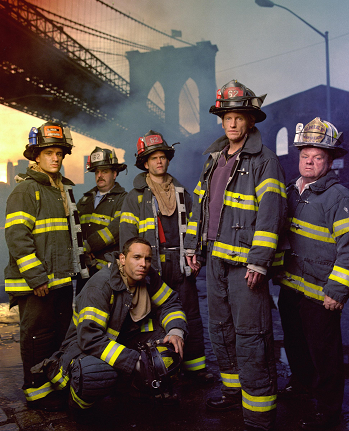 "You wanna know how big my balls are? My balls are bigger than two of your heads duct taped together. I've been in the middle of shit that would make you piss your pants right now! Uptown, downtown, Harlem, Brooklyn. But there ain't no medals on my chest, assholes, cause I ain't no hero. I'm a fireman. We're not in the business of making heroes here. We're in the business of discovering cowards, because that's what you are if you can't take the heat. You're a pussy, and there ain't no room for pussies in the FDNY!!!"
— Tommy Gavin, on the bravery of the FDNY
Advertisement:

Rescue Me is a drama series created by comedian Denis Leary and Peter Tolan. The series follows the lives of the firefighters of FDNY station Battalion 15, Engine 99, Ladder Company 62 (referred to as a whole by the firefighters as "62 Truck"), as they deal with the job, their personal lives, and the strange quirks and oddities that seem to only happen to firefighters (such as the fact that women, no matter what their preference, line up like geese for firemen). The series starts three years after 9/11, with many in the house still reeling from the loss of four brother firemen, one of whom was Tommy's cousin and best friend. From there, it is a long, slippery slope into cheating, homosexual bashing, questioning life itself, and death.

The show ran for seven seasons and concluded on September 7th, 2011 - less than a week before the tenth anniversary of 9/11, which was a major point within the last season as well.

Not to be confused with the ecchi manga Rescue Me!.