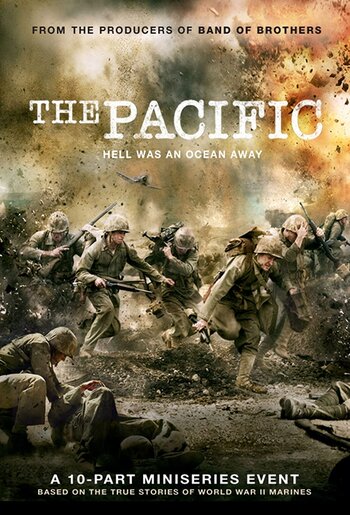 "History is full of war, fought for a hundred different reasons. But this war, our war, I want to believe... I have to believe... that every step across that airfield, every man that's wounded, every man that I lose... that it's all worthwhile because our cause is just."
—Captain Andrew "Ack Ack" Haldane
Advertisement:

Produced by Steven Spielberg and Tom Hanks as the Spiritual Successor to Band of Brothers and/or The Thin Red Linenote as Band of Brothers is to Saving Private Ryan, The Pacific is a ten-part miniseries that premiered on HBO beginning on March 14, 2010. It tells the story of the 1st Marines in the Pacific Theater of World War II through the eyes of three men: Robert "Lucky" Leckie, Eugene "Sledgehammer" Sledge, and John "Manila John" Basilone. From Guadalcanal, to Peleliu, to Okinawa, they experienced a war vastly different from the war their fellow countrymen fought in Europe.

Since The Pacific is mostly based on historical and personal recollections of these Marines, almost all of the tropes below are automatically an example of Truth in Television.

During the Battle of Cape Gloucester, Robert Leckie's unit is attacked by Japanese infantry in the midst of a heavy downpour.

During the Battle of Cape Gloucester, Robert Leckie's unit is attacked by Japanese infantry in the midst of a heavy downpour.