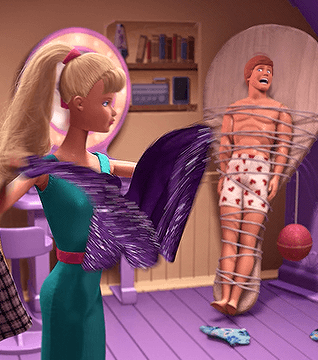 A character needs to get information from someone, but Cold-Blooded Torture or the Jack Bauer Interrogation Technique would make them seem too nasty, or would simply be ineffective. So instead they threaten to destroy... the priceless Ming vase!
Advertisement:

Usually only used by heroes on characters that show a distinct regard for possessions over human life, so it seems a bit like they deserve it. However, when push comes to shove, villains are vastly more likely to actually go through with the threat, and will typically choose an item with sentimental value to their target, such as a Tragic Keepsake.

Often Played for Laughs (see Torture for Fun and Information), with a common punchline being the victim's retort that "that wasn't even mine".

Barbie hits Ken where it hurts to get the information she needs.

Barbie hits Ken where it hurts to get the information she needs.