Film / Day of the Evil Gun 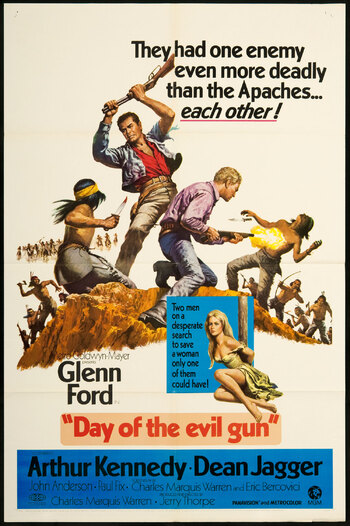 Day of the Evil Gun is a 1968 film Western starring Glenn Ford, Arthur Kennedy, and Dean Jagger. It was directed by Jerry Thorpe.

Former gunslinger Lorn Warfield (Ford) returns home after three years absence to find his ranch in ruins and learns that his wife and children were abducted by an Apache raiding party. Though he has renounced violence, he now takes up his gun again and does in search of his family. Unwillingly, he accepts the help of his neighbour Owen Forbes (Kennedy) on his quest. Complicating matters, Forbes is engaged to Warfield's wife, who believed her husband was dead. Along the way, they run into Mexican bandits, army deserters and Apaches.