Film / The Daughter of Dawn 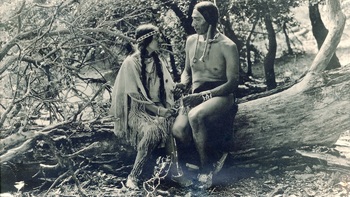 The Daughter of Dawn is a 1920 film directed by Norbert Myles.

It is notable for being a movie about Native Americans featuring an all-Native American cast (specifically, Kiowa and Comanche). The film is set in an indefinite time period sometime after the Spanish brought the horse to the Americas but before the white man destroyed the Native American way of life. The chief of the Kiowas has a daughter he named Daughter of Dawn as she was born as the sun rose. Daughter has two Kiowa braves vying for her hand. Her father is inclined to favor Black Wolf, who has "many ponies" to bring to the marriage. However, Daughter herself loves White Eagle, a charismatic young brave who is the tribe's best hunter. Waiting off to the side is Red Wing, a young Kiowa woman who is in deep and unrequited love with Black Wolf.

The chief tries to get Daughter to accept Black Wolf, but she insists on White Eagle. Her father arranges for a test of character to see who will win his daughter's hand. Meanwhile, a group of Cheyenne, the Kiowa's enemy, is lurking about, waiting for a chance to steal the Kiowa's ponies and their women.

The film depicts a native dance which would have been strictly forbidden by United States authorities if it hadn't been for a movie. White Eagle was played by a Comanche named White Parker, who was the son of Quanah Parker, who was a pretty important guy

Compare White Fawn's Devotion, a short film made entirely by Native Americans in 1912.