Film / Death on the Diamond 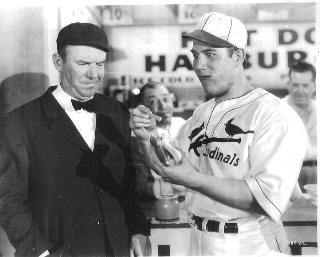 Death on the Diamond is a baseball-themed 1934 mystery film directed by Edward Sedgwick, starring Robert Young.

arrive for spring training. The team did not do very well the previous year, so owner/manager Pop Clark (David Landau), determined to turn things around, went out and signed star pitcher Larry Kelly (Young). Cocky young Larry immediately falls for Pop's pretty daughter Frances (Madge Evans), who is the team secretary. Pop doesn't have time to worry about that, though: he mortgaged his interest in the team to buy Larry, and if the Cardinals don't win the pennant, Pop loses control of the team to the man who loaned him the money, Harry Ainsley. There's also a gangster, Joe McEvoy, who accepted a lot of bets on the Cardinals and stands to lose a million dollars if St. Louis wins the pennant.

The Cardinals surprise everyone by rocketing to the top of the standings. Someone out there is determined to stop the Cardinals from winning, however, so they result to murder, killing Cardinal players one by one. As the season heads for the home stretch the Cardinals players have to concentrate on winning the pennant and staying alive.

In Real Life, the Cardinals really did win the pennant in 1934, and the World Series too.