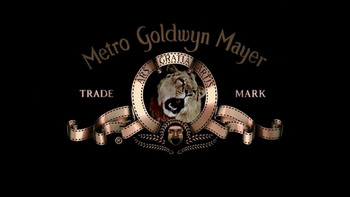 You probably know them better by their initials: MGM.

MGM started in 1924 with the merger of three studios, the already well-established Goldwyn Picture Co. and two lesser known studios (Metro Pictures and Louis B. Mayer Pictures), under the aegis of New York-based theater chain Loews, Inc.note (the individual studio names kept their own slightly different typefaces on the MGM title card until the late 1950s.) Mayer was installed as vice president of studio operations, and Irving Thalberg (a young producer who had gotten his start at Universal) was hired on as director of production. From the time of the merger until Thalberg's untimely death in 1936, MGM was the top studio in Hollywood, making money even during the height of the Great Depression.

After Thalberg's death, however, things started to change. Producers started taking charge of their own films, eventually leading to power struggles with Mayer over money and content. Mayer was a trenchant conservative, supporting The Hays Code and disliking more cerebral, literary content; Thalberg was the opposite. Thalberg generally managed to win out, however, due to his connections with Nicholas Schenck, president of Loews, Inc. Not only were his films released more often than Mayer's preferred films, but he was at one point actually paid more than Mayer.

The success MGM had during the Depression and World War II came to a halt soon after the war ended, as audiences' tastes changed. Television was taking off, and like most studios at the time, MGM was slow to acknowledge it. On top of that, the Fall of the Studio System had started, and without Loews to help tide them over when a movie flopped, MGM's finances got rockier and rockier. Before Loews spun off MGM, their management had insisted that the studio hire a "new Thalberg" to stem the tide of cost overruns; just like with Thalberg, their choice, Dore Schary, ended up going head-to-head with Mayer on just about everything, particularly choices in which films to make (Schary wanted to make Darker and Edgier movies with more serious plots, whereas Mayer was content with sticking to films in The Musical and family genres, something that would have also put them in direct competition with Disney within the decade). Eventually, Mayer got fed up and left note whether he was fired or quit depends on who you ask in 1951.

The new management still didn't help, and Schary was released from his contract after Raintree County, a big-budget American Civil War period piece, flopped. Not long after this, Loews spun the company off and closed most of the theaters, leaving it open to takeover attempts from investors. As something of a bookend to this era the last of MGM's classic musicals, Gigi, was released in 1958, one year after the animation department was closed down with most of its talent going to form Hanna-Barbera.

MGM spent most of the 1960s trying to Retool itself for the New Hollywood era. It made fewer pictures per year, and the ones it did make had to be huge hits because the company's future ended up depending on a hit. Huge, lavish productions were back in vogue, with MGM betting that big movies would be better suited to draw people away from their TV sets and into theaters. When it worked, it worked well (such as with the 1959 version of Ben-Hur), but flops were bound to happen (the 1962 remake of Mutiny on the Bounty was one of the biggest), and each one just added to MGM's already huge debts. Many of their once-reliable stable of actors had been let out of their contracts, due to the money problems. The studios themselves were in declining shape. However, MGM struck gold when it produced and released (under the Premier Productions label) the critically acclaimed, taboo smashing box office hit, Blowup, in 1966, in direct defiance of The Hays Code, thus driving the final nail into that Censorship Bureau.

Finally, a Las Vegas investor named Kirk Kerkorian bought MGM in 1969, beginning a cost-cutting drive that saw MGM lose what little prestige it had left. Kerkorian, who wasn't all that interested in Hollywood at the time, mainly saw MGM as a brand he could re-use for his casinos and hotels; he started selling the studio off in pieces to make quick cash. MGM's props department was opened up and sold at auction, and its backlots were sold to housing developers. MGM filmed fewer and fewer movies at their Culver City lot, as directors in that era started moving to location shooting and cheaper rental studios. In 1973, MGM sold its distribution division to United Artists, foreshadowing the merger that would end up happening in 1981, at the time resulting in the biggest combination between major movie studios until Disney's acquisition of 20th Century Fox in 2019. By 1976, the damage was done; infamously, Kerkorian's legal counsel released a statement that year claiming that "MGM is a hotel company, and a relatively insignificant producer of motion pictures."

By the mid-1980s, MGM/UA was producing and distributing well-known movies again (such as Fame, Poltergeist, Diner, Red Dawn, WarGames and the James Bond films), but was still racked with debt from years of poor performance (as well as UA's losses from backing Heaven's Gate). Kerkorian put the studio up for sale, and Ted Turner ended up winning the bidding in 1985. However, the massive amount of debt was off-putting, and Turner decided he wanted out only a few weeks later. Turner ended up selling UA and the MGM trademark back to Kerkorian, and the studios went to Lorimar; the studio lot eventually ended up with Sony after Warner Bros. bought Lorimar (Columbia Pictures had been renting half of Warners' lot from them since the early 1970s, and the Lorimar deal meant Warners could finally kick them out).

Turner kept the MGM back catalog, however, and that catalog became the backbone of his cable-TV holdings. After a fiasco with colorization in the late 1980s, Turner eventually created Turner Classic Movies, which runs movies from the MGM and Warner Bros. catalogs (which he got from UA via Associated Artists, a TV syndicator UA bought in The Sixties) uncut, uncolorized and with no commercials. Warner Bros. ended up buying Turner's company in 1996, and so now the pre-1986 MGM catalog resides with them. note Turner also kept the rights to Gilligan's Island, which it shares with the estate of its co-exec producer Phil Silvers, apparently just because (and because the show was a staple of Superstation WTBS).

After Turner's brief involvement, MGM/UA began operating under new management and subsequently became profitable thanks to box-office hits such as Baby Boom, Moonstruck, A Fish Called Wanda, Child's Play, Spaceballs and Rain Man, the last of them a Best Picture Oscar winner. However, when Kerkorian decided to sell the company again, the studio head left. MGM ended up being sold to Italian financier Giancarlo Parretti, who had just bought The Cannon Group at the time and renamed it Pathe Communications, in anticipation of buying the French movie studio of the same name; said sale didn't happen after the French government looked into Paretti's background and determined he was too shady to buy it— Foreshadowing for his disastrous reign over the renamed MGM-Pathe. Under his leadership, production of films halted, actors, crew members and creditors were not being paid, and Paretti was spending MGM's money for his own uses. Not only that, but he had borrowed money for the deal under false pretenses, and after not being able to make the payments on the leveraged-buyout deal he'd used to buy MGM, his bank note Crédit Lyonnais, who probably should have known better; their previous misadventures in Hollywood in The '80s led to a graveyard of flops, and this ended up being the final straw that led to their near-bankruptcy. They ended up getting bailed out by the French government and, indirectly, PolyGram Filmed Entertainment; see below. foreclosed on him and took control of MGM. Parretti ended up being convicted of securities fraud, and MGM ended up back with Kerkorian in 1997. Shortly after that and continuing into 1999, MGM assumed control of several other film companies and libraries, including Orion Pictures (which they have since revived as a sub-label), The Samuel Goldwyn Company (though Goldwyn himself soon formed another company), and Polygram Filmed Entertainment's pre-1996 library, which also included films from Hemdale and Castle Rock Entertainment. Meanwhile, its television arm claimed international rights to NBC's library.

In 2006, MGM was bought by a consortium of investors led by Sony, with Comcast as a minor stakeholder as well. The studio was then hit with hard times yet again, which temporarily halted a certain secret agent from going on his 23rd mission and a certain little person's chance to go on The Greatest Adventure. In 2010, MGM declared bankruptcy in a deal in which the studio was turned over to its creditors, with Gary Barber and Roger Birnbaum (the co-founders of Spyglass Entertainment) assuming the positions of co-presidents. Because MGM is now primarily a production company, its recent productions had gone to various entities for distribution, with Lionsgate releasing The Cabin in the Woods, FilmDistrict taking on Red Dawn (2012), Warner Bros. acquiring most rights to The Hobbit, Skyfall, the 23rd James Bond movie, staying with Sony, and Paramount with Sherlock Gnomes. However, in 2017, MGM announced a distribution joint venture with Annapurna Pictures which enabled the company to distribute films under its own name using Annapurna's US distribution operation, which was subsequently re-named United Artists Releasing in 2019, in time for UA's 100th anniversary. The first film released under this arrangement was 2018's Death Wish remake, and No Time to Die (2020), the 25th James Bond film, will be released domestically this way (Universal taking international rights). The company had some of its recent releases distributed on home video through 20th Century Fox Home Entertainment. Up until the aforementioned acquisition by Disney, Fox additionally handled catalog releases. Following that, Universal has taken over for newer releases and WB was licensed catalog titles.

MGM is also the owner of the Epix premium movie channel, and a partial owner of multiple digital subchannel networks (This TV, Light TV, Comet and Charge!), which all utilize films and series from the MGM library (though not the portion of the library Turner purchased). This TV, which largely focuses on movies, was originally a joint venture with Chicago-based Weigel Broadcasting; they sold their stake in 2012 and Tribune Media took over as partner, but following Tribune's failed attempt to merge with Sinclair Broadcast Group and subsequent, successful attempt at merging with Nexstar Media, MGM took over full ownership. Light TV is family-friendly content, operated by Mark Burnett (head of MGM's television division) and his wife Roma Downey. Comet and Charge! focus on sci-fi and action, respectively, and are joint-ventures with the aforementioned Sinclair; both can be found in markets where Sinclair stations aren't around via Sinclair's free streaming service Stirr.

The studio's Vanity Plate, Leo the roaring lion, has been widely spoofed and has several variations of its own. On April 16, 2014, MGM celebrated its 90th anniversary.