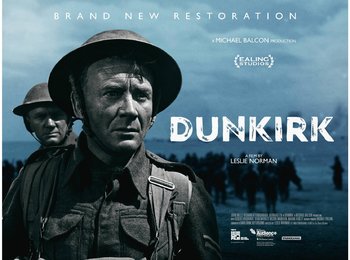 "Dunkirk was a great defeat, and a great miracle."
Advertisement:

Dunkirk is a 1958 film from Britain directed by Leslie Norman.

It is about, yes, Operation Dynamo, the desperate evacuation of the British Army from the port of Dunkirk in late May and early June, 1940. There are two narrative threads. The first involves newspaper reporter Charles Foreman (Bernard Lee) and small factory owner John Holden (Richard Attenborough). Foreman is quite cynical about the lackadaisical British war effort (in the period called the "Phoney War" the British hardly fired a shot in Europe for eight months after the declaration of war) and the lack of engagement among Britons on the home front. One of the people Foreman disapproves of is his neighbor Holden, who is making a killing manufacturing belt buckles for the British Army but otherwise is a typical British civilian, wondering what the point of the war is in the first place. As it turns out, both Foreman and Holden own yachts, and after only a couple of weeks of combat in France the BEF finds itself in desperate need of anything that can float...

The second narrative thread centers on Corporal "Tubby" Binns (John Mills) and his little squad of soldiers in Belgium, fighting the Germans. The military situation has already deteriorated badly when Tubby and his troop are sent to dynamite a bridge to slow down the advance of the Germans in their sector. The troop makes it back to camp only to find out that the rest of their unit has already left, as the whole of the BEF is in retreat. Things get worse when, right after they get back, a Luftwaffe squadron on a strafing run destroys their truck and kills their only officer. Corporal Binns, now in command, has to lead seven men on a desperate journey on foot northwards.