Film / The Americanization of Emily 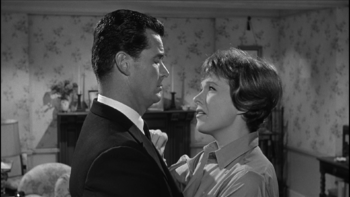 The Americanization of Emily is a 1964 satirical anti-war Dramedy directed by Arthur Hiller. It's an adaptation of a 1959 William Bradford Huie novel, with a screenplay by Paddy Chayefsky.

U.S. Navy Lt. Commander Charlie Madison (James Garner) is stationed in England in the late spring of 1944. He's an unrepentant cynic and an enthusiastic coward, a man who landed at Guadalcanal, saw the horrors of war firsthand, and decided he wanted nothing more to do with it. So he became an officer and works as an aide to Admiral William Jessup (Melvyn Douglas), who's playing a major role in planning the D-Day landings. Charlie's real job is keeping Adm. Jessup and all the other top Navy brass in England well-supplied with liquor, good food, and women of easy virtue.

"Women of easy virtue" seems to be the real purpose of the motor pool, staffed entirely by attractive young women who drive senior Allied officers around. Among those are Emily Barham (Julie Andrews), who has suffered terribly in the war, losing a father, a brother, and a husband. Emily is initially appalled by Charlie's libertine attitude and lack of patriotism, but can't resist an attraction to him, at least in part because of his laziness and cowardice—Charlie is unlikely to get killed in the war, unlike so many other people who were important to her.

However, much to Charlie's displeasure, a major threat to his cushy rear-echelon lifestyle emerges. Adm. Jessup is worried about the Navy getting upstaged by the Army in the imminent invasion of France, and he's also been acting increasingly erratically since the death of his wife. He decides that "The first dead man on Omaha Beach must be a sailor," and he further decides that a Navy propaganda unit must be there to film it. And he chooses Charlie to lead that team.

Julie Andrews' second movie, sandwiched in between the smash hits Mary Poppins and The Sound of Music. Also notable as the only black-and-white movie she ever made, and a rare role in which she doesn't sing.