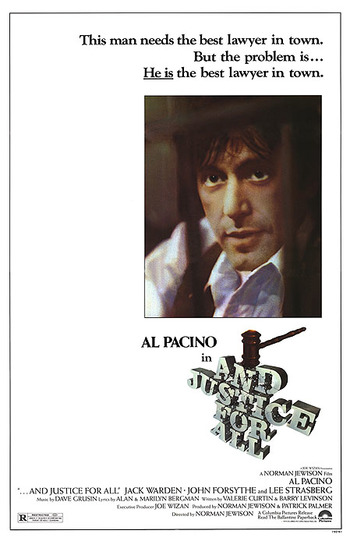 Arthur Kirkland (Pacino), a very moral public defender in Baltimore, is growing sick of all the evils inherent in the justice system. One of his clients is Jeff McCullaugh (Thomas G. Waites), a man wrongly imprisoned due to a name mix-up and frame job, and whom the Jerkass Judge Henry T. Fleming (Forsythe) won't release due to a minor technicality; his close friend and colleague Jay Porter (Jeffrey Tambor) has a serious mental breakdown, after a client murders again following acquittal; and Kirkland is subsequently forced to hand over one of his cases to an apathetic lawyer, with disastrous results.

Meanwhile, Kirkland is in trouble with the state bar association's ethics committee for having snitched on a client (after he learned that somebody was forcing people to put lit cherry bombs into their mouths at gunpoint, which said client had repeatedly fantasized about doing); he's become romantically involved with Gail Packer (Christine Lahti), one of the committee's members; his beloved grandfather Sam (Lee Strasberg) is slipping into dementia; and the closest thing he has to a mentor is eccentric Judge Francis Rayford (Warden), who repeatedly engages in borderline-suicidal behavior.

While he's in this happy place, Kirkland learns that Judge Fleming has been arrested for rape. Not only that, but—to his gaping incredulity—he learns that Fleming wants Kirkland to be his defense attorney; Fleming, though he loathes Kirkland, feels that if he's seen representing him, it will make people think Kirkland believes he's innocent and help the case (since why would anyone defend a man he so despises otherwise?). Kirkland can't get out of it, either, because Fleming has friends in high places, and holds great sway over the ethics committee (he is also the one that brought the client-snitching to their attention), as the judge reminds him.

Stress and frustration mount up as one of Kirkland's clients commits suicide and another is killed in prison. Meanwhile, Kirkland gets more and more proof that Fleming is actually guilty as hell. Then, just before Kirkland stands up to give his opening statement on Fleming's behalf, the judge tells him he'd be happy to "meet" the victim again sometime...

Pacino was nominated for an Academy Award, as was the screenplay by Valerie Curtin and Barry Levinson. Not to be confused with Metallica's 1988 album of the same name.