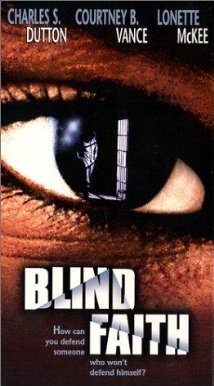 "How can you defend someone who doesn't want to defend himself?"
Advertisement:

Blind Faith is a fictional 1998 legal drama written by Frank Military and directed by Ernest R. Dickerson, and stars Courtney B. Vance as rising lawyer John Williams. The film premiered on the cable network Showtime.

Primarily set in 1957 Bronx, John lives with his elder brother Charles Sr. (Charles S. Dutton), poised to become the first African American sergeant in the NYPD. When Charles' 18-year-old son, Charles Jr., is arrested for the murder of a white youth in Van Cortland Park, John comes the defense of his nephew but soon discovers that there is much more to the case than anyone realizes.