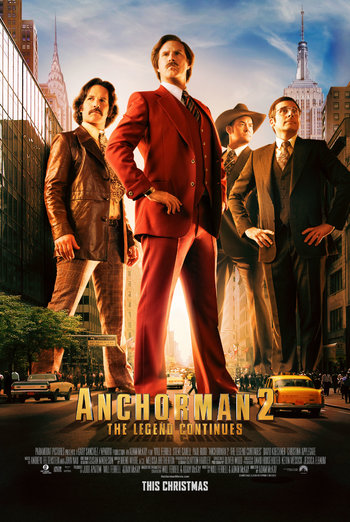 It's kind of a big deal.
Advertisement:

The sequel to Anchorman: The Legend of Ron Burgundy, released in 2013 by Paramount, which currently owns the rights to the Anchorman franchise courtesy of their ownership of the DreamWorks SKG library.

Several years after the end of the first film, it's 1980 and Ron and Veronica are successful co-hosts of the GWN weekend newscast in New York City, with a son to boot. When Veronica is promoted to anchor GWN's weeknight newscast and Ron fired, Ron gives her an ultimatum: Him, or the job.

Six months after Veronica leaves him, and shortly after being fired from SeaWorld in San Diego, Ron is approached to take part in GNN, the first ever 24-hour news station. While he is skeptical, he doesn't have any other prospects, so he reassembles his old news team and attempts to do the best job he can... in the 2 AM timeslot. What ensues will change television news forever, but their lives and those of the people around them will also be changed in far more - and far more absurd - ways than one.

A Re-Cut of the film titled Super Sized R Rated Edition was released in theaters for one week beginning February 28, 2014.