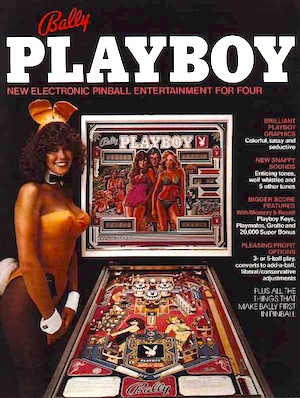 I play it for the Specials, honest!
Playboy (Bally) is a licensed arcade pinball game released by Bally in 1978. Designed by Jim Patla with artwork by Paul Faris, it eventually sold over 18,000 units, making it one of the best-selling pinball tables ever.note Fourth-best, after The Addams Family, Eight Ball, and Flash. Appropriately enough, the first machine (serial number #0001) was presented to Hugh Hefner himself, who placed it in the Mansion's game room.
Advertisement:

Unlike the magazine on which it's based, this game makes no qualms about being all about the scantily clad women. The backglass depicts Hugh Hefner with Playmates Patti McGuire and Sondra Theodore, who are hanging out at Hugh's grotto with an assortment of Playboy characters. The game itself doesn't need or have much of a plot: Collect the keys to the Grotto, hit the dropdown targets, and collect five Playmates for bonus points and extra balls, all while Patti and Sondra watch from the playfield.

In 1980, Arkon Automaten of Germany released Sexy Girl, a conversion kit for European markets starring model Ann Pennington. The kit replaced the scantily clad Playmates with even racier nude art, while the Playboy logo on the playfield was replaced with an embedded slide projector that displayed photos of models in various states of undress during gameplay.

The Playboy pinball and the Sexy Girl conversion kit demonstrate the following tropes: