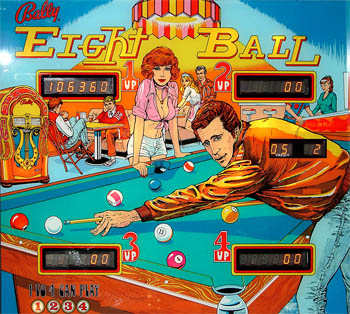 "Am I allowed to say 'Ayyyyyyy'?"
Advertisement:

Eight Ball was a Physical Pinball Table designed by George Christian. Released by Bally in 1977, it set a new record for the industry with 20,230 tables sold, a threshold that was only surpassed by The Addams Family nearly fifteen years later.

As one of Bally's early solid-state pinballs, Eight Ball was groundbreaking for being able to track the progress of each player via software. Targets would reset for each player based on their earlier state, preventing players from "stealing" the work of others. Eight Ball followed the rules of pool in the pinball game, requiring players to sink the seven balls of their type (solids or stripes) before shooting the eight ball for the jackpot.

Eight Ball is also noted for "borrrowing" the likenesses of The Fonz and Pinky Tuscadaro (Henry Winkler and Roz Kelly) from Happy Days on the backglass and cabinet art. Reportedly, Bally got in trouble with Paramount Television and CBS as a result, but the details of the settlementnote if any are unclear. 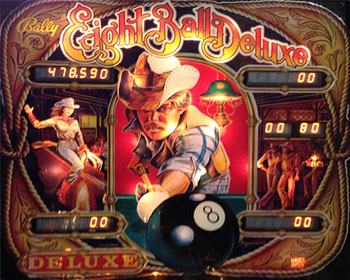 Naturally, the success of Eight Ball led Bally to develop a sequel. Released in 1981, Eight Ball Deluxe was designed by George Christian, with art by Margaret Hudson. Instead of The Fifties malt shop-and-greaser theme of the original, Deluxe went with an Urban Cowboy atmosphere. The game takes place in a western bar, complete with mechanical bull and sawdust on the floors. The main draw, though, is the unnamed shooter, a steely-eyed mustached cowboy (and his attendant girl) having a game of pool against the player.

Eight Ball Deluxe took advantage of the technological advancements of the day, offering a more complex set of rules and digitized voice clips. While it was not a record-breaker like the original, it was still a hit. Bally offered a "Limited Edition" a year later, and re-released the original in 1984; they featured different cabinet designs and art, but the playfield remained the same.

A digital version of Eight Ball Deluxe was developed in 1993 by LittleWing and published by Amtex for the Apple Macintosh and Microsoft Windows computers. Amtex' bankruptcy had left the game in legal limbo until 2016, when a modern digital version was released for The Pinball Arcade. However, with that game's license with WMS expired as of July 2018, the table is once again in legal limbo. 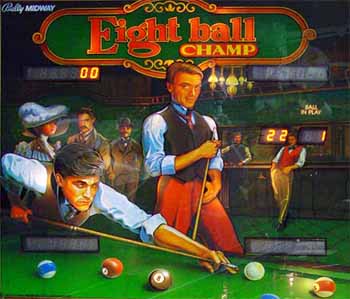 "Too bad, you scratched."

Bally returned to the well once more with 1985's Eight Ball Champ. This time around, George Christian and artist Tony Ramunni set the game during The Edwardian Era, with two sharp-dressed men playing pool at the local gentleman's club while others hang around the background. Once again, the objective is to sink your seven balls, then pocket the eighth for the win.

Unfortunately, while players consider Champ a decent game, it did not catch on as well as its predecessors did, possibly because it was a single-ball game at a time when multiball was popular. In the end, fewer than 2,000 units of this game were made.