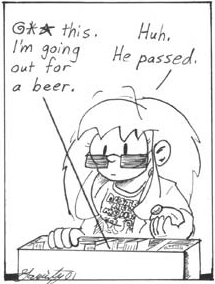 Superintelligence in action.
"I HAVE DONE LITERALLY NOTHING! What's my prize?"
— Tourist, RBG Productions
Advertisement:

Some games reward a character for not tackling the challenge in front of them. This could be a form of Dynamic Difficulty, where the player is given an advantage if they haven't managed to overcome an obstacle after a certain amount of time, or may be a solution to a puzzle. In some cases, especially with MMORPGs, they actually reward you for logging off entirely!

One unusual application of this idea is the Automatic Level: do nothing, and it plays itself out.

Related to Just Ignore It. Compare Sheathe Your Sword for the Puzzle Boss version of this.

See also Idle Game, a genre of games in which automatic progress without the player's input is a core mechanic.

Contrast Guilt-Based Gaming, in which the game tries to make you feel bad for being idle or gone for a while. Despite the title, this is not Wins by Doing Absolutely Nothing, as the latter case involves letting your opponent destroy themselves while you stay back and watch. That trope is also more focused on a sort of Batman Gambit, in the sense of the enemy's flaws undoing them without you needing to do anything.