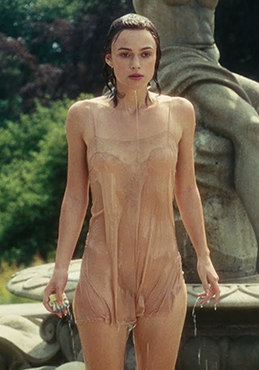 "Besides, if you wear that, people will just think you're naked. It's... Paula-coloured."
— Ariel Ramos
Advertisement:

You're watching a TV show or video game, and one or more characters come onscreen who look like they're wearing practically nothing. Or even like they actually aren't wearing anything at all. But after a few minutes of titillation or horror, you realize that they are wearing clothes after all. They're just the exact same color as their skin.

There are two common reasons for such outfits:

A variation of this trope is how the color of the clothes are registered by value levels in black and white photos, such as gold or beige being registered as "nude" in light skin tones, and the same thing with certain shades or red and blue in dark skin tones.

Compare with Fully-Clothed Nudity, which is where folks aren't naked at all but feel like they are. If this results in the appearance of seemingly unintentional nudity it may overlap with Unfortunate Character Design.