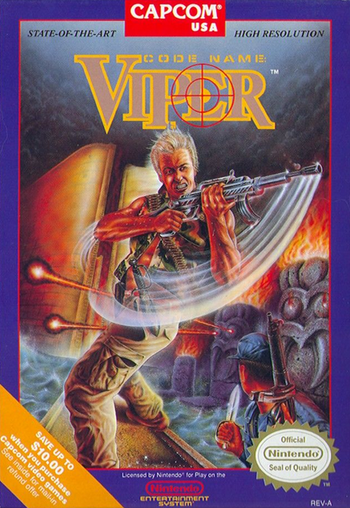 Code Name: Viper (Ningen Heiki: Dead Fox/人間兵器デッドフォックス, The Human Weapon: Dead Fox in Japan) is an action game published by Capcom for the Nintendo Entertainment System in 1990. The game was developed by an uncredited Arc System Works (who were still a contractual developer at the time), who previously worked on the Famicom/NES port of Namco's Rolling Thunder. As a result, Viper serves as a sort-of spiritual sequel to Rolling Thunder (despite the different publisher).

As special agent Kenny "Viper" Smith, you are sent by the cigar-chomping Commander Jones to South America to break up a massive drug-dealing syndicate and rescue hostages Trapped Behind Enemy Lines, as well as your fellow agents, who will give you clues to help you uncover the secret of the drug ring.

At first, you're armed with only a pistol, but can eventually find a machine gun (that sports a higher rate of fire) to aid you in your mission. In order to complete each level, you need to search for the hostage who will give you the dynamite needed to get past the door at the end.