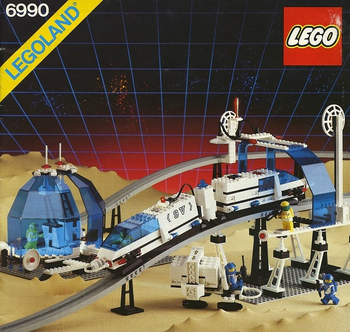 To boldly go where no minifigure has gone before...note 6990 Monorail Transport System from Futuron.
LEGO Space was launched in 1978 (or 1979 in North America) with some vaguely NASA-inspired color schemes and not much of a long-running story or characters. That was the case until 1987, when "themes" were introduced for the first time across Town, Space, and Castle. Space's first themes were Blacktron, which kicked off in '87 worldwide, and Futuron, which launched in Europe in '87 and North America in '88. This began a long, continuous, and loosely-defined story starring a revolving door of factions that would last all the way into 1999.
Advertisement:

LEGO Life on Mars and anything that ran afterward are generally counted separate from this era, as there was a two-year hiatus between and the end of Insectoids and the start of Life on Mars, its stylistic technological shift back to a more probable near-future and the inclusion of two separate factions under the umbrella of a single set banner. Rock Raiders, strangely, is never counted as any sort of LEGO Space at all despite being explicitly set on a foreign planet and being released immediately after Insectoids.

The following LEGO Space subthemes and related sci-fi themes have their own pages:

This theme as a whole provides examples of:

Both the first criminal faction and the first truly defined faction. Blacktrons carry an air of mystery and intimidation with them, which comes just as much from their menacing monochromatic motif as from the lack of additional materials to flesh their characters out. They antagonize the Futurons for unclear reasons.

Futuron (1988-1990)
No description of Futuron's motives or agenda exist, except that they are the "Valor squadron", which vaguely implies that they are good guys. Their uniforms and ship designs are an extension of the late Classic Space theme, with their spacesuits now featuring white torsos and new visored helmets. They also have a monorail, which is nice. They often find themselves defending against encroachments by Blacktron and are known to collaborate with M-Tron forces.
M-Tron (1990-1991)
The M-Tron (presumably short for Magnet-Tron) faction introduced magnets to LEGO Space, utilized in sets as a means to grasp various cargo containers easily. M-Trons are a civilian group of nomadic miners and techs who maintain at least one mobile base of operations and harvest precious materials from remote locations, most visibly in the form of transparent yellow 1x1 round pieces. They've been seen collaborating with Futuron

◊ and ably defend themselves from attacks by both incarnations of Blacktron.
Blacktron Future Generation (1991-1992)
Possibly the same group with a new tech base and new uniforms, possibly a copycat group, possibly descendants of the original Blacktron. The only thing truly known about the nature or motivation of Blacktron Future Generation is that they share the antagonistic nature of their namesake. They oppose the M-Tron and Ice Planet 2002 factions and are out to steal their technology.
Ice Planet 2002 (1993-1994)
Ice Planet 2002's sets focus on a group of scientists stationed on the remote ice planet Krysto who research new rocket and satellite technologies while carving out a livable colony from the harsh environment. They fend off incursions by Blacktron Future Generation and Spyrius (who show special interest in their satellite tech for espionage) and maintain at least a working relationship with Space Police II.

◊
Spyrius (1994-1996)
Thieves and spies hailing from planet Spyrius. The Spyrians grab information and technology from other factions to further their own ends. They show a particular affinity for rocket/missile tech, likely to facilitate a covert intelligence network, and as such show great interest in the research happening on Krysto. Unitron opposes Spyrius openly, having suffered at least one direct attack by them.

Unitron (1994-1995)
Unitron is located at the "crossroads of the universe", where astronauts and aliens from all across the galaxy converge. Notable only for having a monorail that was sometimes attacked by giant Spyrius robots. A disorganized release schedule, short set list and shortage of fluff left this faction woefully underdeveloped despite recalling elements of old fan favorite sets and creating one of their own. Unitron is primarily seen combating Spyrius on their home turf.
Exploriens (1996)
Civilian scientists (with a specific bend towards xenoarchaeology this time). Exploriens sets made use of colored transparent pieces in a new way for LEGO: Multicolored pieces (alien fossils in the setting) were prevalent in this faction's sets, and when viewed by the naked eye or under red or blue filters they would reveal one of three different images. Their main enemy is initially Spyrius, until UFO shows up.
Roboforce (1997)
Roboforce was unique in their sets' focus on terrestrial vehicles, specifically giant robots. Not explicitly listed as military or civilian, Roboforce fills an almost municipal role on the interstellar stage, with separate teams acting as a search-and-rescue force and a sort of space Home Guard. Likely at least a partial inspiration for the Exo-Force theme. Their enemy is UFO, as well as the occasional run-in with Time Twisters.
UFO (1997-1999)
The first aliens to actually see release in LEGO Space. Their backstory and motivations change with each telling: LEGO Mania Magazine depicts them as invaders from planet Humorless, Bricks 'n Pieces casts them as freedom fighters from planet Xivos, and German adverts describe them as explorers from Zotax. The aliens of UFO are painted as an aggressive, militant society through their mechanical designs, vessel names, and if that wasn't enough, one catalog even shows them engaging in combat with the Exploriens the moment they see them, targeting their main starship and blasting it into pieces. They are also stated and shown to be enemies of Roboforce.
Insectoids (1998-1999)
The last set in the traditional LEGO Space theme. Insectoids features a race of alien nomads, the Zotaxians, displaced from their home planet after losing a Civil War against their unjust ruler. They escape to Holox, a planet full of hostile giant insects called Bilgen Bugs and adapt their technology to camouflage themselves with their new environment and to assist in the process of digging to the "inner sun" of the planet to tap its energy. Surprisingly, they were never shown interacting with UFO, Exploriens, or any other factions, but they DO appear in a crossover with Scooby-Doo in LEGO Mania Magazine.