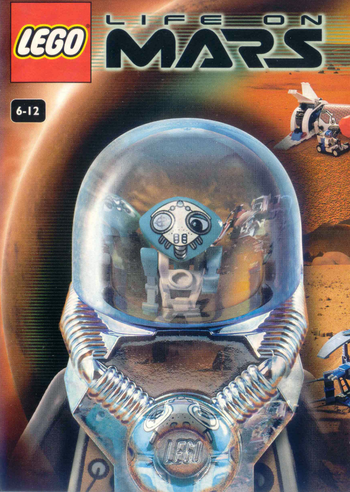 LEGO Life on Mars was a short-lived LEGO theme from 2001, and a subtheme of LEGO Space. Basically, a small group of human astronauts crash-landed on Mars, discovered Martians, and sat down and observed them for a while. It is unusual among LEGO Space themes for its stronger focus on exploration and discovery over combat; the human astronauts had no interest in conquering the Martians and instead preferred to observe their lives. The only conflict takes place in the online story, where the human astronauts help the friendly Martians deal with a violent rebel faction.
Advertisement:

This was the last true LEGO Space theme for several years, until its Spiritual Successor LEGO Mars Mission turned up in 2007. Although both themes share the same Martian setting, unique vacuum pump system, and other similar concepts, Mars Mission does not continue the storyline of Life on Mars and presumably takes place in its own continuity.

Unrelated to the TV show Life On Mars, though that would be awesome in its own right.