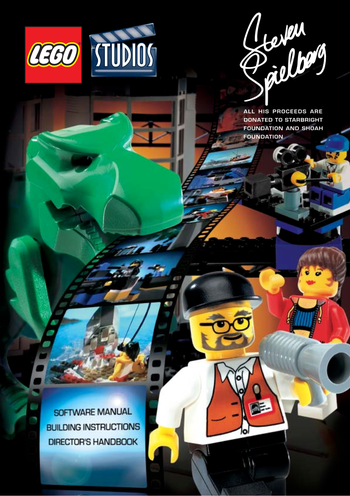 LEGO Studios is a LEGO theme based upon the behind-the-scenes making of movies. Introduced at the end of 2000, it made its debut with the Steven Spielberg MovieMaker Set, which came packaged with a USB camera and computer software to let users film and animate their own movies, giving birth to many young brickfilmers.
Advertisement:

The theme really kicked off in 2001 with a variety of sets depicting props and special effects, everything from stunt cars to exploding banks. Several sets also tied into the newly-released Jurassic Park III, although they were only loosely based upon scenes from the movie and did not feature any of the film's characters. On LEGO.com, the LEGO Studios Backlot browser game (developed by Templar Studios of Mata Nui Online Game fame) saw players breaking into the show business by helping out actors and crewmen.

In 2002, LEGO Studios branched out with two subthemes. One was centered entirely around the horror genre featuring vampires, mummies, werewolves, and more, serving as a loving homage to the classic Universal Horror movies. The other was Spider-Man, LEGO's first foray into the Marvel Comics license. The largest set of both subthemes contained SoundFx software allowing users to edit premade LEGO animations and add sound effects; this sound effects library could also be imported into the Steven Spielberg MovieMaker Set's software.

A year later, the Spider-Man subtheme divorced itself from the LEGO Studios branding and became a standalone theme. Its success would eventually lead to LEGO licensing other Marvel and DC Comics properties. LEGO would also later renew the Jurassic Park license in time to produce sets based on Jurassic World.

This toy series provides examples of: