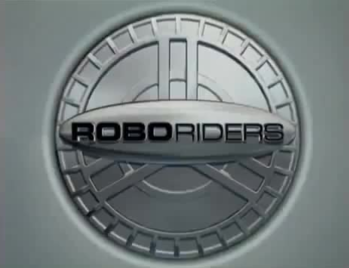 A relatively short-lived (1999-2001) range of LEGO Technic figures, Spiritual Successor of the Slizer and forerunner of BIONICLE. Sandwiched in between these two considerably more popular lines, many people consider RoboRiders to be a failure, although that's not to say it doesn't have something of a fanbase of its own.

The sets were, essentially, Cool Bikes with Elemental Powers that came in six distinct colorations, based on those elements. Each figure had a set of varied weapons, but the main gimmick was that their front wheels could be used as projectiles.

Wait, you say, doesn't this render the bikes useless every time they fire at something? It gets better than that. Just wait until you hear the story explanation for it!

According to the backstory, there once lived a race of unnamed, advanced beings in Cyberspace, divided into six regions (LEGO was fond of using this type of setting). An evil might cast a dangerous Computer Virus over them, so the inhabitants of this world crafted wheel-shaped armor for themselves, along with six motorcycle-shaped Humongous Mecha to ride in. And when we say "ride in", we mean that the pilots were the wheels. And they used themselves as projectiles!

And so they defeated the virus.

There were seven kinds of RoboRider vehicles (Swamp, Lava, Frost, Power, Onyx, Dust, and "The Boss"), and 16 rider characters (or "Wheels") altogether

But as LEGO wanted to be done with the line, it was never revealed who that evildoer was that released the virus in the first place. Some speculate it was "The Boss", the last figure to be released and who also had no official bio, but others say he was the leader of the RoboRiders instead.

As it's been said, the line wasn't a great success. For one, it mostly did away with the ball-joint system introduced in Slizer, and as you may have guessed, firing wheels don't quite make for long-lasting play sessions. But aside from these, the backstory was way better thought-out than that of its predecessor, the line introduced the canistersnote barrel-shaped storage containers that the sets came in and many other, now-common LEGO pieces which Bionicle and other Technic lines made great use of. There were also collectible items, namely the Wheels. Finally, four smaller promotional sets were also released, but they never appeared in the story.