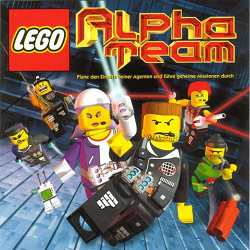 LEGO Alpha Team is a LEGO Theme first released in 2001 and discontinued in 2005, revolving around a team of secret agents who foil the dastardly plans of Evil Ogel, who wants to Take Over the World.

Unlike all other LEGO Themes, LEGO Alpha Team is unique in that its videogame adaptation was actually released in 2000, a full year prior to the first wave of sets. Developed by effects house Digital Domain and released for PC and Gameboy Color, LEGO Alpha Team is a Puzzle Platformer with the premise that, in the search for Ogel's secret bases, the entire Alpha Team has been captured, and it's up to you to move Alpha Team equipment around Ogel's bases to help Dash Justice, the last remaining agent, open doors and rescue his teammates before foiling Ogel's latest plot.

The first wave of sets, closest in premise to the videogame, revolved around Alpha Team's efforts to locate the Ogel Control Center and stop Ogel's production of Mind-Control Orbs, which he uses to turn innocent people into mindless zombie minions. The second wave of sets, with the subtitle Mission Deep Sea, moved the action to deep beneath the ocean as Alpha Team battled Ogel's army of mutant sea creatures in search of the Ogel Underwater Base.

The third and final wave of sets was a Retool of the Alpha Team theme, with much of the cast receiving dramatic makeovers and Alpha Team's color scheme changing from yellow to blue. This time, Ogel plans to freeze time itself by spreading Ice Orbs across the globe, and Alpha Team must race against time to locate Ogel's Mountain Headquarters before it is too late.

Not to be confused with that other LEGO Alpha Team or The A-Team (which appeared in LEGO Dimensions).