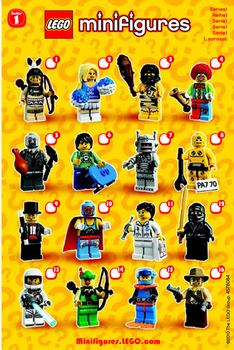 A LEGO theme that focuses entirely on minifigures. Each wave, or "Series," contains 16 different minifigures individually-packed in sealed opaque bags.

See also LEGO Minifigures Online for the Massively Multiplayer Online Role-Playing Game based upon this theme.