Wooden Katanas Are Even Better 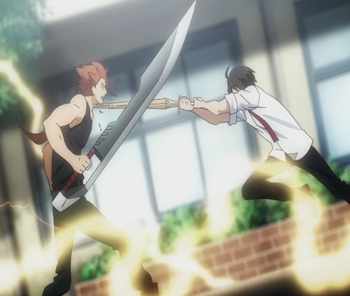 In the right hands, wood beats steel.
"Wooden or bamboo swords are just as sharp as metal swords, if not sharper."
— The 100 Rules of Anime

: #41 The Law of Xylolaceration.
Advertisement:

For those familiar with Japanese culture, Katanas Are Just Better. For those who live in Japan, Wooden Katanas Are Even Better. Ever since Miyamoto Musashi defeated Sasaki Kojirou with a bokken (a practice katana made of wood), the wooden sword has become a symbol for the ultimate swordsman.

Sometimes they have the impossible cutting power of the steel versions, but usually these are more about the skill of the wielder than anything else, especially if he is so skilled that he can make a wooden sword cut as well as a steel one. Sometimes it's actually because the wielder is a Technical Pacifist (though bokken are also a classic weapon of Japanese Delinquents).

Bamboo shinai are also commonly used, and they are even lower impact because their construction allows for it to give more, and these often end up in the hands of younger characters.

This seems like an Improbable Weapon, but wood can still be dangerous if sharpened enough (just like a javelin can be dangerous, or an arrow or spear without a metal tip). But even if it isn't, getting hit with a bokken is about the equivalent of a baseball bat or axe handle, which means bones can be broken or worse, and shinai can cause concussions. Note how at least these days, those training with these weapons have to wear safety gear. In the right hands, a wooden sword is even capable of shattering a katana.

It should be noted that simply using one is not quite enough for this trope. The weapon has to stand up well. If it beats a steel weapon, it's definitely an example.

Can still be used in a Single-Stroke Battle.

Interestingly, Musashi didn't really cut Sasaki Kojiro with his bokken. According to Musashi by Eiji Yoshikawa, he actually cracked his skull with it. And, to add the insult to injury, it wasn't even a proper bokken: because Musashi was partying hard before the duel he not only got late to the agreed place, but in his hangover he forgot his bokken and had to jury-rig a replacement from a boat's spare oar. Presumably, the incredible cutting power is due to a certain rule.

In Japanese, the term "bokuto" ("wood sword"), is more common and more specific to a single-edged sword. This word may also be read "bokuta" or "kigatana". The "ken" in "bokken" refers more generally to a blade, especially double-edged blades (and yes, this is the "ken" in "kendo").

During his "duel" against Da Samurai, the pair of them are surrounded by Akus' latest model assassin droids, and Jack simply demonstrates that it's not a sword that makes a Samurai.

During his "duel" against Da Samurai, the pair of them are surrounded by Akus' latest model assassin droids, and Jack simply demonstrates that it's not a sword that makes a Samurai.