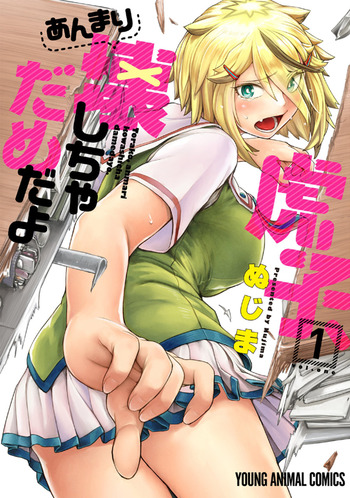 Ooaoi Private Academy is a school that assembles delinquents and thugs from all over Japan. Its students are rowdy and violent, and even the teachers will start class by telling the students "Sit down, fuckers."
Advertisement:

Aiko Torasawa, nicknamed Torako, is a new student at Ooaoi. Legends of the destruction she's left in her wake, from demolished buildings to fighting wild bears, precede her. To look at her, however, Torako is the furthest thing from the delinquents who otherwise populate this school. She's a shy crybaby who just wants to be friends and it would be easy to assume the legends have been exaggerated... except she's also inhumanly strong, has no control over that strength, and can be quite clumsy to boot.

So begins the story of Torako, Anmari Kowashicha Dame da yo (Torako! Don't Break Everything!) by Nujima, which ran in Young Animal Arashi from 2016 to 2018. An ecchi school comedy in which Torako tries to make friends in a school full of delinquents, assuming she doesn't accidentally kill them first...