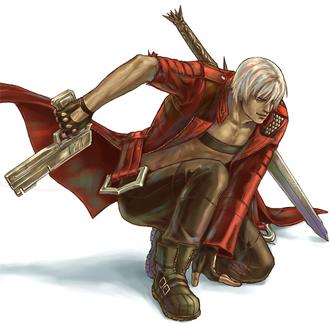 A gun and a sword (or other melee weapon) combo... when not used at the same time. Typical combination for characters and armies on the advent of gunpowder, the ranged weapon in this case is often more of a throw-away weapon used to down an opponent before closing to meet with the rest. The gun can be a pistol or a rifle just as well - in fact, the musket itself (which the musketeer is named for) is a long two-handed gun. This sort of a warrior tend toward the Wooden Ships and Iron Men — pirates may even wear a bandolier with several loaded pistols, like Real Life Blackbeard did, in addition to two pistols on his sword belt — and Swashbuckler settings, but not limited to them. Samurai Cowboys need both a Revolver and Katana, so they apply as well. It can even be more modern and futuristic, up to Jedi proficient in both the blaster and the lightsaber.

One important thing: these weapons aren't reserve weapons. This trope is for fighters who are proficient in using both the gun and the melee weapon. Someone who is just picking up a lead pipe or something because their gun is out of ammo isn't an example. The character is good with both weapons and will use them as the situation fits.

Bayonets are a special case. They are a blade that attaches to the front of a gun weapon that turned it into a short spear. Many variety of bayonets are basically a modified knife that clips or fixes onto the front of the gun and can be wielded like a fighting knife when not attached to a gun.

Not to be confused with Sword and Gun, which is when this trope meets Dual Wielding. Subtrope of Choice of Two Weapons. See also Bow and Sword in Accord, which often serves the purposes of this trope in older settings. Compare the Multi-Melee Master, who tends to alternate between close-ranged weapons.